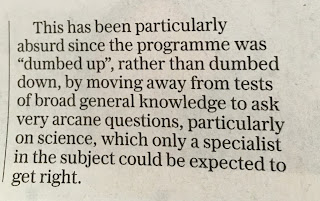 I rarely see the Daily Telegraph, but at the weekend I was at the house of someone who takes it. I couldn't help become a little incensed at an opinion piece by someone called Christopher Booker, bemoaning the 'dumbing up' of University Challenge. Given the proximity to the world marches for science, I couldn't help comment on the piece.

Famously, C. P. Snow once made a big thing of the 'two cultures' of the arts and sciences, pointing out that people from the arts side expected a well-educated person to have a good knowledge of the arts, but themselves expressed a kind of smug satisfaction in their ignorance of the sciences.

I could be wrong, but it's difficult not to read Booker's use of 'particularly' as essentially saying 'I expect everyone to have a good knowledge of the arts, but having a good knowledge of the sciences is for specialist weirdos.' The reality is that the science questions are no more specialist than the arts ones - but they might appear to be if you have the kind of prejudice that Snow identified.

In the last decade or two it has occasionally been put about that Snow's assessment no longer applies, but it seems it's alive and well, at least in the pages of the Telegraph.
arts C.P. Snow idiocy science two cultures