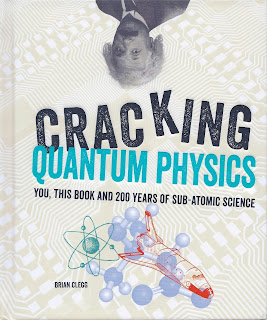 I'm very pleased with my new book Cracking Quantum Physics. It's a chunky, beautifully produced, heavily illustrated little book, designed to give beginners an idea of what quantum physics is all about.

In over 300 pages, mostly in easily digestible two-page spreads, it covers everything from our first thoughts about the nature of matter through to possibilities for quantum gravity.

One thing I do need to address, as it has already caused John Gribbin to raise a sarcastic eyebrow is the sub-title 'You, this book and 200 years of sub-atomic science.'

This book is part of a series of 'Cracking' books (Grommit) and they all have this kind of format in the subtitle, for which the author has no input.

I sort of get what the 'you, this book and...' bit means, even if it is a trifle cringe-making, but the part John was surprised about is '200 years of sub-atomic science.' What could this possibly refer to?

Arguably the first definitive sub-atomic science came in a number of discoveries that suggest bits could break off atoms or be particles that were less than atoms. These could include:


... but it's difficult to use even the most shaky arithmetic to get 200 years out of any of these. 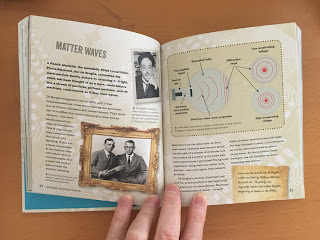 I asked the publisher, and their justification is that 'Although the book starts in ancient Greece, I didn’t think anyone would be convinced by a strapline that said "2,500 years of sub-atomic science", so I thought the early 1800s was a more likely start point given Dalton’s introduction of the weight of atoms... Although not ’sub-atomic’ it is where the story gets going and gives us a nice meaty number.'

However, I think we can go one better than this by using Dalton, for which the round figure of 200 doesn't work too badly. Although we refer to Dalton's 'atomic theory', there is an implicit sub-atomic order in the (often incorrect) atomic weights that Dalton published. Without some kind of sub-atomic structure, it's hard to see how the relative weights of atoms could possibly vary by round numbers.

So actually, despite my first puzzlement and admittedly with a touch of sophistry, I don't think it's too bad a subtitle after all.