Review - A Night in the Lonesome October - Roger Zelazny ***** 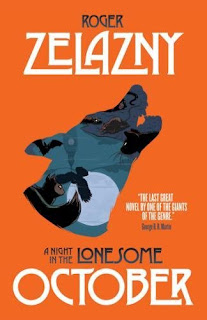 If you're wondering why I review less here, my SF reviews are now all on www.popularscience.co.uk - but this one is fantasy.

Roger Zelazny has always been one of my favourite authors, so it was a delight to discover his last novel, which I'd never read. It sounds like an unlikely topic to be successful. The book is narrated by Jack the Ripper's talking dog, Snuff. It tells of the preparations for a strange Game played out when Halloween falls on a full moon - featuring some familiar fantasy characters (full marks if you spot who Larry Talbot is before it's revealed) and Lovecraftian dark forces. If this sounds an unlikely plot, Zelazny is the master of taking the unlikely and making it entertaining. And he does it here to the maximum.

Although some of Zelazny's work was science fiction - the excellent Doorways in the Sand, for example - he's best known for his wisecracking fantasy series set in Amber. However, the style in A Night in Lonesome October is very different. In fact, if you were given a copy of this book with no idea of the author, you'd be more likely to guess at Neil Gaiman - it's hard to believe Gaiman, particularly in his short stories, wasn't influenced by it.

There's also a touch of Bradbury about the combination of wistfulness and playfulness in much of what happens. It's not high art, but if you like this kind of thing, it's altogether a little gem of a book. Full marks to Farrago Books for bringing back this previously out-of-print classic.

Available on Amazon.co.uk and Amazon.com
Using these links earns us commission at no cost to you
book review fantasy fiction novel review