Sleeping with the Lights On - Review 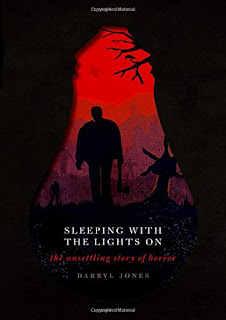 Before considering the contents, I ought to say what a great-looking book this is - small and beautifully formed with a really unusual cutaway front. It's a great gift book if you know someone who's into their horror. Because that's the topic we're dealing with here: ghosties, ghoulies, long-leggity beasties and things that go bump in the night.

There is always a danger in having an academic write about genre fiction that it all gets a little po-faced (or, in this case, Poe faced). And, I'm afraid, Darry Jones, an English professor specialising in nineteenth century literature and popular fiction, does rather have this tendency. It's not that his analysis lacks interest, but it can be a touch short on readability. There's also a distinct over-reliance on Freud, apparently not realising his work, from a scientific viewpoint, is more fiction than science.

The book is divided into sections on monsters - including, of course, vampires and zombies - 'the occult and the supernatural', 'horror and the body', 'horror and the mind' and 'science and horror' (featuring Frankenstein), with a final section that highlights twenty-first century work. It covers books, film and TV, though the medium that comes across strongest is film. It did seem that on the book side, there was a heavy bias to the literary over the popular (Jones, for example, doesn't distinguish sufficiently between the covers of Dennis Wheatley's books and their content), where the approach to films verges on the trashier the better - but I suppose that reflects the academic reverence for 'literature'.

I've always been more into science fiction and some areas of fantasy than out-and-out horror, partly because I see no entertainment value in gore, but it's interesting to read about genres that give us insights into readers and writers, and there's no doubt that Sleeping with the Lights On really delivers in this respect. There's plenty of enjoyment of discovery - for example, I was interested to learn that Arthur Conan Doyle’s father was a painter who specialised in fairies, given Conan Doyle's disastrous Cottingley fairies photographs incident.

I was all set to give Jones a drubbing for having a whole sub-section on vampires without mentioning one of the greatest TV shows of the turn of the millennium, Buffy the Vampire Slayer. This omission seemed to illustrate perfectly the over-seriousness of some of the text... except, in practice, Jones merely keeps Buffy, with its excellent subversion of the genre and inversion of expectations to the end as an example of the way things should be. There was an effective contrast here with some of the moribund churning out of sequels and copies that often typifies Hollywood horror. While I still feel that Buffy ought to have at least been touched on in the vampire section, this was excellent to see.

Overall, this is a genuinely attractive object, and a book that will make both the horror fan and the horror hater think again about the genre.

Sleeping with the Lights On is available from Amazon.co.uk and Amazon.com.
Using these links earns us commission at no cost to you