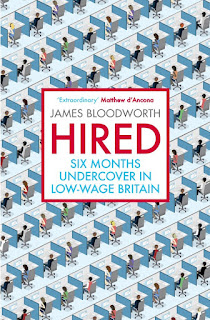 Purely by coincidence, I asked Father Christmas for two sort-of travel books with a social conscience, so it's handy to be able to review them both together.

The first I read was James Bloodworth's Hired. Rather like a modern version of Orwell's Road to Wigan Pier, Bloodworth's book describes six months 'undercover in low-wage Britain.' Bloodworth takes on jobs in an Amazon warehouse in Rugeley, as a care worker (sort of) in Blackpool, in a call centre in the South Wales Valleys and as an Uber driver in London.

His experiences provide valuable insights into the life that goes with these low wage jobs. The workers face two huge problems - not being paid enough to live on and oppressive working conditions, including zero hours contracts. The low pay was potentially the case in all the examples (in principle, the Uber driving could have produced a better return), while the conditions varied from the extremely iffy at Rugeley to pleasant enough at the Admiral call centre, where Bloodworth had to struggle to find anything to complain about other than a boring job and the company culture being a little too jolly.

The tasks at Rugeley and in Blackpool were also like to leave the worker so worn out that they had very little other life. At least, in principle this applied in Blackpool, as Bloodworth was never able to actually do the job because his Disclosure and Barring Service clearance did not come through in time for him to undertake the task, though he was able to shadow another worker for part of his time there.

Bloodworth does a good job in uncovering the reality of these jobs and the lives of those who undertake them. He claims that he is only observing and doesn't offer solutions, but in an epilogue does give a little thought to this. Suggestions (from here and elsewhere) of a realistic living wage, the ability to be unionised and end to zero hours contracts are straightforward and sensible. However,  Bloodworth's analysis does skip over one thing that comes across glaringly in his account. This low wage economy is propped up by freedom of movement. Reading the book made me significantly more sympathetic to Jeremy Corbyn's viewpoint that leaving the EU would be beneficial because companies would have to pay more without a ready supply of low paid EU nationals to fill these posts. Of course that means more cost to consumers and taxpayers, but surely that is worthwhile to avoid such poor working conditions?

Will reading this book make me stop using the companies and services Bloodworth mentions? No - that would inconvenience me and wouldn't help the workers. But the picture it gives of these low pay jobs does encourage me to look to future governments for a better living wage and improved worker's rights.

Hired is (ironically) available from Amazon.co.uk and Amazon.com 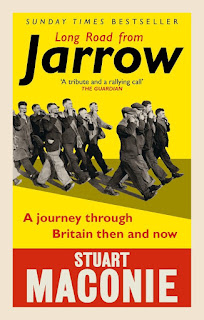 One thing that does come through, particularly in Bloodworth's coverage of Blackpool is another parallel with George Orwell - a touch of comfortable South-East driven disgust at the poor provincials. This certainly isn't the case in the other book I read, Stuart Maconie's Long Road from Jarrow. For me, Maconie has taken over from Bill Bryson as the doyen of humorous British travel writing. This title is a touch more serious than his previous ones, but still allows for his warmth and friendliness to come through. Maconie follows the path of the 1936 Jarrow march, when 200ish steelworkers marched to London to present a petition asking for government assistance in creating new jobs after their steelworks closed.

Day by day, the book follows the stages of the march exactly 80 years on from the original. Maconie gives a mix of well-researched history, delving into the reality of a march that many will have heard of, but most only have a vague idea about (like many others, I associated it with mining and the depression of the 1920s), bringing in his own experiences on the walk. The timing of the book is also brilliant as he was able to include reflections on the Brexit vote in the UK and the American election of Donald Trump.

The only downside of the theme of the book is that Maconie does not have as much freedom to do as he wants - he has to stick to the daily schedule - as a result of which, there is rather less humour and social interaction than in his other books - but that sacrifice is well worth it. Whether he is revelling in diverse eating places along the way (Maconie says people complain he talks too much about food, but for me that's part of the charm of his writing), wryly commenting on socialist meetings he attends or reflecting on the Hillsborough disaster as he passes through Sheffield, Maconie is engaging and insightful. It's the kind of book where it's difficult to avoid sharing snippets with others in earshot.

One example of his insight that Bloodworth would have been unable to share was in his assessment of the reasons for Brexit. With a deep understanding of why Northerners in particular may feel a resentment that spilled over in a response to the Brexit vote that was unexpected from the comfortable metropolitan elite, Maconie is able to say why he is against Brexit - but also tearing apart the attitude of those who label Brexit supporters racist and ignorant. He clearly understands and explains the drivers for this decision.

However, as much as it features, this isn't a book about Brexit, and Maconie brings the story of the Jarrow Crusade alive, with its many unexpected twists and turns, whether it's a warm welcome for them from the establishment Ripon Cathedral (and Maconie's own delight at attending choral evensong) or the varied accommodation and receptions the marchers received along the way, including terrible treatment at Westminster, where their petition was practically ignored. Maconie manages to celebrate multicultural Britain now, while still being strongly aware of the very English nature of the march, the landscape and the social climate then and now. An excellent book.

Long Road from Jarrow is available from Amazon.co.uk and Amazon.com