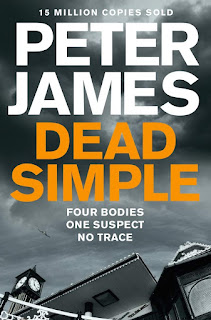 A good British crime novel is a wonderful thing, and I felt fairly confident coming to Dead Simple because according to the cover it has sold 14 million copies. But, for me, it was a huge let down.

Peter James manages a couple of interesting twists and turns along the way, which I presume accounts for those sales. But the characters are mostly two-dimensional, the plot is incredibly far fetched - and this is a world where mediums can solve crimes.

There are a couple of interesting ideas in the plot line, but the trouble is that James piles coincidence on unlikelihood to produce a ludicrously infeasible string of events. Add to this a deus ex machina ending dependent on a psychic's ability to exactly locate a missing person using a pendulum and a map (why do we bother with the police, when psychics could just solve all the crimes?) and the result is a book that convinces me not to take another step in the Roy Grace series.

I usually put links to Amazon at this point - but I can't see why I would.
books crime fiction detective stories review