Where Shall We Run To? - Alan Garner - review 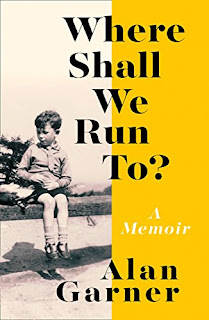 There is no doubt that Alan Garner is a remarkable writer, for whom a sense of place is absolutely central to his writing - so it's not entirely surprising that in this memoir of his childhood up to the age of 11 (with a couple of short articles from later years), the location where he was brought up - Alderley Edge - plays as much as part as his childhood friends and relations.

This was not the Alderley Edge of the modern football star - the village from mid-1930s to mid-1940s was a typical large rural village of the period with the familiar combination of eccentrics and everyday occurrences. Garner was a sickly child, whose illnesses also have a major influence on what we read.

For such a sophisticated writer, there is a deceptively simple style, relating events in a way that seems not much different to the way the young Garner himself might have related them - relatively little pastoral description, far more on what happened, with a casual attitude to time that enables him to flit backwards and forward through those ten years or so. School features large, as does family, and the ever-present Edge itself.

My main disappointment as a reader is that, while Garner hints at his transition to grammar school, he stops the narration before arriving there. This fits entirely with his sense-of-place driven approach, but I went to the same grammar school, also from the school of a large village (though 20 years later, and from a Lancashire village) and I would have loved to have discovered his experiences in Manchester - perhaps (please) there will be a sequel.

It's a short book that would be possible to read in a single sitting and a delight that Garner fan, and many others would want to share.

Where Shall We Run To? is available from Amazon.co.uk and Amazon.com