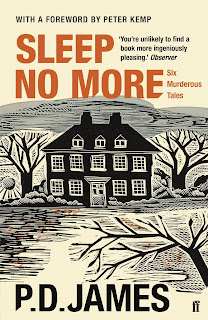 I like a good murder around Christmas, preferably with a Christmas theme. When I got these six murderous short stories by P. D. James, I was only expecting some good writing, but in practice a couple of them do have Christmas themes, notably the longest entry in the relatively slim volume, The Murder of Santa Claus, which also includes a traditional country house setting. It makes a fitting companion to the four stories in The Mistletoe Murder (though I do feel Faber were rather tight in splitting these into two - both books together would make a good length for a single volume).

These mostly aren't murder mysteries in the traditional sense, in that they tend to be seen from the viewpoint of protagonists rather than detectives, but each story features a killing (probably - one is not entirely honest with us), and each is both a beautiful piece of writing and takes us into the working of a dark mind. My favourite was the most gut-wrenchingly powerful, The Girl Who Loved Graveyards, which starts as a story of a poor orphaned girl, but turns out to be something very different... but each is in its own way a little gem.

Many other writers have tried their hand at short story murder mysteries with mixed success, but I don't think anyone else did it as well as P. D. James. These are miniature masterpieces, and though they don't really fulfil my urge to find the perfect Christmas murder mystery, they are certainly excellent pieces of work that reminded me that I ought to read more P. D. James than I have to date.

Available from Amazon.co.uk and Amazon.com.