Review - You Are Awful (But I Like You) - Tim Moore 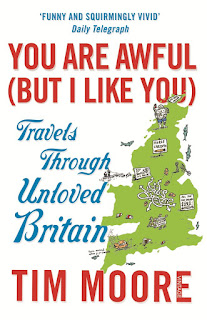 Not a biography of Dick Emery, but a humorous UK travel book, one of my favourite genres. With Bill Bryson setting the bar and Stuart Maconie managing to better Bryson's approach with a mix of wry observation and genuine affection, Tim Moore had stiff competition. The concept behind the book was to visit places that are widely considered to be awful and see what they are really like - Moore goes the whole hog by making the journey in an awful car (an Austin Maestro) with a soundtrack of awful music, choosing to eat and stay in the dregs of the rating system.

There are dangers attached to this approach. Of the six places I've lived, three could well feature in such a book (though, as it happened, only one did - the one that most deserved it - and that tangentially), and I wouldn't be very happy if they got the same sort of treatment Moore gives to, say, St Helens, Rhyl and Cowdenbeath. The good side is that he gives genuinely interesting historical context to the sad state of places such as Hull or Barrow, but despite his claim to like these places, it's hard not to see at least some of his comments (and his attempts to phoneticise local accents) as typical 'Londoner snipes at the provinces'.

I'd also say that Moore's masochistic requirement to eat at the most horrible establishments he can find (or to stay in total dumps) does not help in giving a good picture of these locations. A Maconie version would have given us a warts and all view: Moore only provides warts and more warts.

The book is not uninteresting, and occasionally entertaining. I enjoyed the historical context and some good unlikely trivia (such as the comedian Roy 'Chubby' Brown's real name being Royston Vasey) - but I think the straightjacket of a format that Moore placed on himself limits the book's ability to be truly enjoyable and fails to give a fair picture of places where real people live. One thing is certain, though: if I'm ever in Middlesborough, I won't be ordering a parmo.

You Are Awful (But I Like You) is available from Bookshop.org, Amazon.co.uk and Amazon.com.