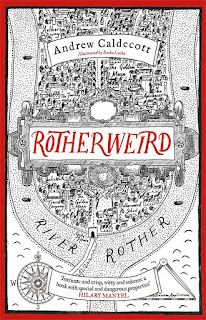 I much prefer fantasy novels set in the real world, rather than some swords and sorcery kingdom, so was delighted to come across Rotherweird, with its cracking concept of an establishment from the sixteenth century that still exists in the present day as a town and surrounding countryside cut off from the rest of England with its own rich traditions. Rotherweird hides a dark secret involving gateways to an alternate world and a phenomenon that can produce strange combinations of creatures and abilities.

Andrew Caldecott builds particularly, I'd suggest, on the tradition of Mervyn Peake's Gormenghast books, in the gothic complexities and rules of Rotherweird and the odd names, with a touch of Harry Potter thrown in from some aspects of mixing this with modernity. However, the book stands in its own right as a piece of hugely imaginative writing. Some of the characters verge on cliché (to be fair, this is also true of Gormenghast), but there is some interesting development of them, which mitigates this to a degree.

Without doubt, there is a richness and complexity to Rotherweird's world, combined with a well-crafted plot that keeps the pages turning. I think my only issue with the book is the key potential failing of fantasies set in the real world: we can accept any oddity in the fantasy part, but the real world part has to be realistic. Here there are two bumps in the road. Science plays a significant role in Rotherweird (if not the plot), so I wish Caldecott had got some good science advice, as there are a number of issues with the science mentioned in passing. And the idea that a town could be complete cut off from the rest of England by decree in the 21st century probably needed more nuances. In reality there would have been Rotherweird websites, visits by drones and more.

These are small complaints, though. Overall, a great piece of imaginative writing and I am very much looking forward to reading the two (to date) sequels.

Rotherweird is available from Bookshop.org, Amazon.co.uk and Amazon.com.