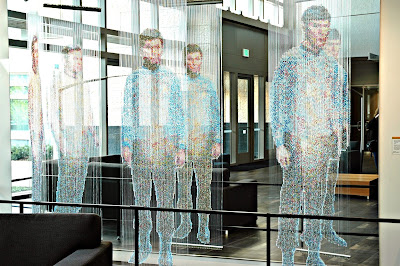 A commonly-held misbelief is that science fiction is about predicting the future. It really isn't. However, this doesn't mean that SF views of the future are not useful in hindsight. They are very good for highlighting the ways in which the imagination misfires.

One of my favourite examples was  a James Blish novel, where the author pointed out that electronics would be useless in Jupiter's atmosphere, because the immense pressure would collapse the valves (vacuum tubes) that were required for pre-transistor electronics. But the particular case I would like to use here is more about SF's approach to information. Science fiction from the 1960s and early 70s had a huge miss in envisaging something that is commonplace now - ready access to high bandwidth information flows.

A classic example of this was on the original series of Star Trek, where Mr Spock is regularly seen inserting little plastic rectangular objects into a console to access different data stores. Of course these looked hi-tech when compared with the methods of storing data most of us used back then - but the approach entirely missed the point that it made no sense for data to be stored on little objects you had to manually shuffle when it could simply come from a central store.

Even more dramatic in its fail is a science fiction story I'm currently reading in a collection published in 1970 - SF-17, part of long-running 'New Writings in SF' series edited by John Carnell. In the story More Things in Heaven and Earth by one H. A. Hargreaves, a character decides that they want to listen to some guitar music played by Andres Segovia over breakfast. As I've recently mentioned my music listening is now all streamed, so I was able to do this just now to accompany my writing with a couple of clicks - or have done so by asking Siri. But in the story, the character 'began to absently leaf through the tape listings, then dialled a Segovia'. Shortly after, she 'picked off a cassette as it came through the slot, and slipped it into the console' so now guitar sounds could 'float through the room'. This is in a story set in a university where lectures are given using 3 dimensional holographic video connections, used in interactive lectures across half a continent.

What's fascinating to me is the gap between the imagined future and reality. H. A. overshot on 3D holographic video, but failed to see that the idea of physically transporting information on tapes would not be necessary in a world capable of such data communication.

I'm not saying that science fiction needs to be better at predictions - once again, it's not what it's about. But I do think when we are trying to be imaginative, these misfires reflect assumptions about what can't be changed. We need to be bolder in thinking beyond the way things are done today. All too often imagination is limited by the way things have always been done, or by assumptions about what can and can't be changed.

Next time you are looking for ideas, ask yourself what assumptions you are making, and what could happen differently if those assumptions didn't hold.