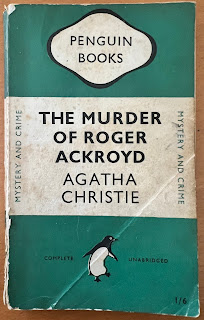 As someone who writes murder mysteries (see https://www.brianclegg.net/fiction.html) I also love reading  them and watching them on TV, but perhaps because of spending time thinking about book plots, I've noticed that sometimes the relationship of the reader/viewer to the medium makes it possible to get clues that the characters can never access.

In TV mysteries, for example, there is always the 'well known actor' syndrome. This says that actors who are famous are likely to have an important part in the proceedings, as they wouldn't be hired just to do a bit part. Then there's the weird placement effect. What we are shown on TV or read about in a book is carefully controlled. So although we have to deal with red herrings, the fact that something is mentioned that doesn't need to be alerts us to its possible significance.

However, I've just come across an even more meta* example of a piece of information providing the solution to a whodunnit where not only could the characters not access it, but even the information itself was specifically intended not to give anything away.

At the weekend I watched an Agatha Christie documentary on Netflix which used the hook of ten of her books to tell the story of her life and work. The second of these was the 1926 gem The Murder of Roger Ackroyd. Rather oddly, I had a copy of the book, but I had never read it (the Penguin copy, illustrated here, is a 1949 edition I inherited from my grandmother). If I'm honest, I've only read about three Christie books as I've always given more weight to the likes of Margery Allingham and Ruth Rendell, but the documentary inspired me to read this book (and a few others of Christie's are now on my reading list).

I was pleasantly surprised - although written in the 1920s it's surprisingly unstuffy and although the writing style is fairly basic, entertainingly plotted. Yet, thanks to the documentary's attempts to keep it secret, I suspected strongly who did it all along.

Here, then, is the meta bit. What every said in the documentary was that the book had an amazing plot twist - that all the evidence was there, but the ending was extremely surprising. And that, for me, was what gave the game away. I admit there are probably more, but I can only think of three truly remarkable plot twists in a whodunnit. Two of these, I knew were used in other Christie works (one book/film and the other a play). So it seemed very likely that the third was the case with Roger Ackroyd - and this proved to be the case.

I'm not going to give it away - and ask you not to do so in the comments. If you don't know the book and want to see if you can make the same correct deduction I did, then email me at brian@brianclegg.net and I will be happy to confirm if you've guessed right.

The Murder of Roger Ackroyd is available from Bookshop, Amazon.co.uk and Amazon.com

* The term 'meta' here and in the title of this post is not in away connected with Facebook's appropriation of a commonly used word - which arguably they should not have been allowed to do.