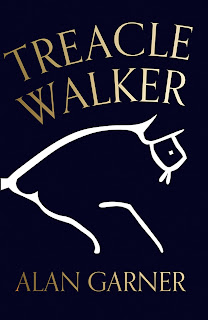 Alan Garner is, without doubt, one of the UK's greatest fantasy writers. I was privileged to grow up with his books, which aged in audience as I did, peaking for me with The Owl Service. Garner also visited my (and his) school, which the book is dedicated to, when I was 12, a really important moment in my young life. But I lost some enthusiasm with his adult titles, which were both difficult to follow and depressing. However, now well into his 80s, Garner has produced what is arguably his best yet.

Although Treacle Walker is a very compact book in large print, it is so intensely written that it still has considerable heft - I've seen it described by someone as poetry, and although I wouldn't personally say that, like the best poetry it does pack a huge amount into relatively few words. The book's protagonist is a young boy, but this is not a children's book. The closest parallel I have is Ray Bradbury's wonderful Something Wicked This Way Comes - the book captures much of the essence of childhood, but does so in a way that appeals to the nostalgic side of an adult who can see far more in it than a young reader.

Like all Garner's work a sense of place and time is hugely important. As someone brought up in Lancashire, the use of language from Garner's Cheshire youth evokes many memories, though you don't have to have that background to appreciate it. Just the references to donkey stones and rag and bone men, for example, bring so much back. There is even a reference to the old Pace Egg plays performed by mummers in the North West, when a character of Garner's says 'I have been through Hickety, Pickety, France and High Spain' - compare this with the doctor's claim in the traditional Pace Egg play to have travelled 'Through Italy, Sickly, High Germany, France and Spain'.

At one level, the book is a folk fantasy, and of course Garner does this brilliantly well. He has always combined local material with wider ranging concepts (for example the use of Ragnarok in his first novel), but never more so than here, where one of the elements, also featuring on the cover, is the white horse at Uffington, a powerful image, coincidentally situated near where I now live. But there is also more going on, particularly in the ending, suggesting a totally different take on what has occurred with a distinctly darker undercurrent.

Overall, this is a masterpiece, a book I will re-read many times. If it is a swan song, then like the legendary original it is something of intense beauty. Remarkable.

Treacle Walker is available from Bookshop.org, Amazon.co.uk and Amazon.com.