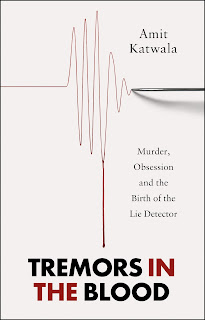 There is something beguiling about the concept of the polygraph - the proper name for what is usually known as a lie detector. Surely it makes sense, if technology exists that can tell if a statement is true or false, that lie detectors should provide an important adjunct to the legal system? Unfortunately, though, despite a public assumption that they are scientific, there is absolutely no evidence that lie detectors work - and plenty of evidence that they don't.

What Amit Katwala does in this very readable account is give us an insight into the early development and deployment of the polygraph. In part this is the story of three key individuals - two behind the technology and one a police chief who instigated the polygraph's development, though the larger part of the book comprises a series of true crime stories, introducing in some depth a handful of early legal cases where the polygraph played a role.

The two developers, John Larsen and Leonarde Keeler, both seem to have had serious character flaws, and were single-minded in their assumption that monitoring blood pressure and breathing variations were sufficient to tell the difference between a true and a false statement. While there is no doubt that some people do experience shifts in these metrics when lying, some don't... and everyone, particularly in the scary circumstances of a police interview, is likely to have fluctuations that have nothing to do with the veracity of their answers - not helped by the way that many early attempts seemed to turn the whole thing into a media circus with crowds of reporters and onlookers present.

The crimes are described in immersive narrative fashion, some taking place in the febrile setting of Capone's Chicago, though things start in the rather more refined precincts of Berkeley, California. I don't usually read true crime books - I find reading about other people's suffering for entertainment rather ghoulish - but the context of the lie detector's development and public attitudes to it make it a rather different phenomenon here.

Katwala is clearly more than up to the challenge of presenting these stories in a gripping fashion, and it is genuinely fascinating to see how the polygraph gained its reputation. It would have been good to have had a bit more of the science as to why the device is unreliable and never can be trusted, especially in the context that it is still widely used around the world and is even creeping into use in the UK, where historically it has been treated with well-deserved suspicion. Developments since the 1930s, including using various other equally non-definitive measures such as brain wave patterns, is briefly summarised in an epilogue, which is understandable given the focus is the birth of the lie detector, but perhaps could have had more detail.

Katwala always makes it clear that this was (and is) a dangerous and untrustworthy device. Arguably it is on a par with astrology - both are based on scientific observations (astronomy and physiological measurements respectively), but both draw totally unjustified conclusions from those observations. This is a timely exploration of this dubious technology.

Tremors in the Blood is available from Bookshop.org and Amazon.co.uk