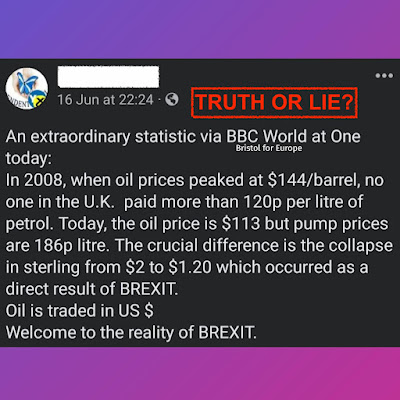 Numbers are a powerful way of strengthening a message - and when we see a statistic that backs up a strongly-held belief, it can be very easy to share it without thinking too much about it. But all statistics benefit from a quick check before use - and it's doubly important to do so when they tell us what we want to hear.

A couple of days ago, I saw this message on a friend's social media. (I've removed the name at the top and added the words in red - otherwise it is unchanged.) The message is stark. But a couple of things worried me about it.

Firstly, that subscript of 'Bristol for Europe' seemed a bit odd. It's clearly not part of the original post, and how exactly could the information come from both the BBC and a pressure group?

But more importantly, the exchange rates quoted didn't feel right. I was sure sterling suffered as a result of Brexit (or, rather, BREXIT - being shouty is another flag that checking of data is required) - but a change like this would result in products priced in dollars, such as iPhones, shooting up in price, which I didn't remember happening.

On checking the actual numbers, it is true that the dollar exchange rate was, at times, $2 to the pound before Brexit - but the last time it had been was December 2007, nine years before the referendum. And for that matter, the exchange rate had also been lower  than it is now before Brexit. In February 1985 it dipped to $1.09 to the pound. Big surprise - exchange rates fluctuate all the time.

As you might expect, the exchange rate did fall after Brexit. The day before the result was announced it was $1.48. After the announcement it was $1.32 and it fell as low as $1.31 a few days later. Since it has rallied, getting back as high as $1.42 and dropping to $1.15 on the date of the UK's first lockdown. At the time the illustrated message was posted, it was moving around the $1.22 to $1.25 mark.

The phrase that Mark Twain ascribed (probably inaccurately) to Disraeli, 'there are three kinds of lies: lies, damned lies and statistics' is much misused. Statistics are very valuable to make clearer what is going on. However, sometimes, as here, the numbers really are lies - and even when they technically are true, they are always worth looking into, because the context can make a huge difference.

It's particularly important to double check validity when you have a strong emotional attachment to the sentiment behind the numbers - because that's when you are most vulnerable to being deceived.