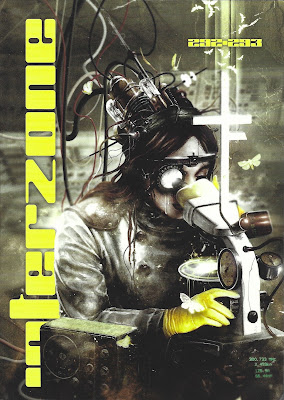 I review SF books on the Popular Science website, but this is a review of a science fiction magazine, which seems a sufficiently different prospect to find its way onto my blog instead.

Interzone is the classic British science fiction magazine dating back to 1982 - I last read it many moons ago when David Pringle was the editor and it was formatted like a magazine - now it's in more of a glossy digest format. As it happens, this double edition marks the change of an era, as it is the last from current editor Andy Cox, who is handing over to Gareth Jelley.

Apparently, the Science Fiction Writers of America don't consider Interzone a professional magazine due to the unusually low rates they pay (just 1.5 cents per word) and the circulation - I think it's a shame. Frankly, they ought to pay more and it's sad that this magazine seems to be looked down on by the SF establishment as it is practically the only such magazine we have in the UK.

As a reader primarily of SF books, I have mixed feelings about Interzone's current incarnation. The format feels odd. Each story has a title illustration, which as a book reader makes it feel a bit childish, but worse, it's a full colour magazine and presumably to make this worthwhile, after the illustration, each story is set in pages with a coloured border reflecting that illustration - to me, this just gets in the way of the words and makes it feel a bit like the design of a 'My Secret Confessions Diary 1982'.

However, it's the content that really matters. This is a double edition - Jelley is apparently going back to bi-monthly single issues, combined with an online magazine Interzone Digital. Apart from an SF news roundup and film review, the content of the magazine amounts to 11 stories - which seems thin for a double edition. Part of the problem was that too many of them were long: more of a mix would have been better. [Updated 22 August (see comments)] I am told that the next two editions editions will feature more stories for a single edition, and will have more shorter stories. [End of update]

For me, there was one standout, a handful of okay stories and a couple of definite misses. The one that jumped out to me was Alexander Glass's The Soul Doctor. This was fairly long, but easily carried the length, rather than feeling padded out. Oddly, for a contribution to a set of SF stories, this was in some ways closer to what used to be called Science Fantasy, on two levels. One is that it is based on the Many Worlds hypothesis, an untestable interpretation of quantum theory that some physicists regard as fantasy. The second is that even if Many Worlds holds, in the story, a character can switch at will between alternate universes, which seems scientifically impossible, especially as he seems to be able to combine this with time travel as he is able somehow to sample different alternate universes until he finds one with the outcome he wants - but Many Worlds doesn't stop the passage of time (in fact it's inherently tied to it). Despite this, what we have here is a really good story, instantly engaging and beautifully developed.

Interestingly, after reading this magazine, the next thing I happened to do was to re-read New Writing in SF 20, edited by John Carnell in 1972. This was part of a series of paperback books featuring new SF stories. The stories in there are, to be honest, of higher quality (I suspect it paid more). It's not that they were more staid and less experimental. The very first story,  for example, Conversational Mode by Grahame Leman, takes the form of a conversation between a patient and a psychiatric computer that at times verges on stream of consciousness, but is a real hit in the gut. So there's a touch of 'could do better' for Interzone -  I have no doubt that there are even more great SF stories out there now.

My other concern is for the future. In his introductory editorial, Jelley tells us his focus is 'fantastika' which apparently is made up of 'horror and fantasy and sf and all the subgenera that subtend like fruit from that triad'. This pretentious wording is Jelley quoting eminent SF expert John Clute, who should know what he is talking about - but to be honest, when I read a magazine like Interzone I want it to stick to science fiction. Of course this can have a horror flavour (or for that matter crime or romance or other genre), and I'll stretch to the Science Fantasy of The Soul Doctor, but I don't want pure horror or fantasy.

Overall, I've mixed feelings about Interzone. I bought a six edition subscription, and I will read the remainder that I receive, but I'm not sure I'll go back to it. I'm really glad it's there, because we ought to be able to support (plural) SF magazines in the UK, but there wasn't enough content that really worked for me.