On the road to Nottingham Science City 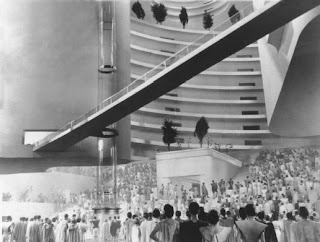 Yesterday I visited the future, sort of. I gave a talk at Nottingham Science City. When I first heard about this it brought to mind something out of a futuristic movie of the 20's or 30's - perhaps Metropolis or Things to Come (as in the picture). But the reality is rather different.

Apparently there are six cities in the UK that were designated 'science cities' in 2005 - Birmingham, Bristol, Manchester, Newcastle, Nottingham and York. It's a little difficult to pin down just what having the status of a science city implies. I assume it involves giving them some funding to perform the kind of roles the group engages in - nuturing the city's role in science, stimulating interest in science and converting scientific innovation into business. 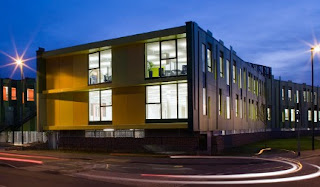 They have been having a series of talks on the science of mitigating climate change, and I was there with my Ecologic hat on to impart some words of wisdom on greenwash and other potential problems in the way of dealing with climate change. Because there isn't actually a science city (shame), the location was the new and shiny No 1 Nottingham Science Park (pictured left). It was rather a surreal venue - a huge room that was clearly not-yet-used office or business space, partly carpeted in the section I gave the talk in, and then the carpet fading out to a shiny tiled or stone surface as the room receded into the distance, rather like a matte painting in one of those old movies. 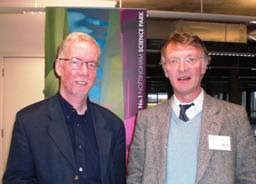 We had an audience of about 70, who listened patiently through my talk (without slides, despite being advertised as 'illustrated'), then responded with one of the most enthusiastic Q&A sessions I can remember - getting on for an hour, with no sign of flagging when the organizer cut things short. The event finished up with a buffet and a chance to chat and for attendees to (groan) network. I know it's a painful term, but it seemed to be working well. All in all, an encouraging evening. It was videoed and is now up on YouTube - the first part is below, the rest you can find with a search of Brian Clegg on YouTube. In the meanwhile, here's a picture of me with a member of the audience, someone I knew electronically but had never met for real, the organist of Nottingham University and Nottingham Parish Church, John Keys. I don't think I was quite as red faced as that. The receding part of the room is just visible in the right hand background.