My take on talks 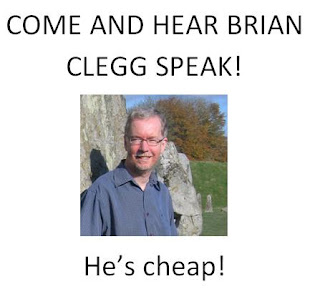 Two of the best bloggers for writers, Jane Smith of How Publishing Really Works and Nicola Morgan of Help! I Need a Publisher have recently weighed in on the subject of payment for talks, particularly at festivals. I thought I'd add my thoughts on the matter. Many overlap with Jane and Nicola, so bear with me if you've already read their remarks.

Jane makes the point that many festivals (some of them big ones) take the attitude 'we won't pay for authors, because they get publicity and sell books.' Nicola picks up on the money aspect and a whole host of other suggestions for festival organizers (including the request to be given a meal but not have to talk to people during it).

I also note one of the comments to Jane's post, where someone who 'organizes [academic] conferences for a living' doesn't see what the fuss is about as his speakers usually do it for free.

Let's get the money thing out of the way first. An academic speaking at a conference is totally different from an author giving a talk. Academics will be paid by their university to attend the conference. The university will probably cover expenses as well. But every time an author attends an event they are giving up earning time. If they aren't writing, they aren't earning. By default, a talk or a festival starts off as a negative impact on the personal finances. And it's not just the hour of the talk. There's preparation time and travel time - it's very rare that a festival appearance won't eat up a day or two's work time with no immediate reward.

Yes, attending such an event will result in some publicity - but typically only with a very small audience. And don't get me started on book sales. The author's cut on the sales of books at a typical festival is probably around the £5 mark.

As far as I'm concerned, giving a talk at a school or festival definitely should be a paid job. As one of our two bloggers suggests, why on earth should festival organizers expect marquee companies to want paying but not authors? It doesn't have to be a huge amount, but a payment is only polite, as is covering all reasonable expenses. I'm not saying I don't do events on an expenses-only basis occasionally. If it's something I particularly support, or I feel I will get a lot of useful publicity, that's a decision I will make - but no venue or event should assume an author will perform for free.

I have to say, I'm less fussy than Nicola on 'riders'. I'm quite happy to share a meal with festival organizers or audience members. I like what I write about and I like talking to people about it. However, I do think any talk organizer should offer the speaker a reasonable level of support. While most schools I speak at are absolutely brilliant, I have had these interesting experiences:
... and really that isn't on.

I don't want this to appear like yet another author's whinge. I love speaking at all kinds of events. It's one of my favourite parts of the job (I accept this isn't the case for all authors), but I think simple matters like payment, expenses and being properly looked after are no more than a reflection of the respect that's deserved in the circumstances. After all, desirable though it may seem to some, it's hard to run a literary festival without authors.
authors festivals schools speaking talks