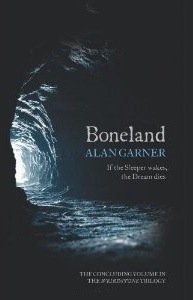 I loved Alan Garner's books as a teenager. And I'd still say that Elidor and The Owl Service are the best Young Adult fantasy books ever written for the younger and older ends of that spectrum respectively. I was also quite fond of his first two books, The Weirdstone of Brisingamen and its sequel The Moon of Gomrath. They were also gripping fantasy adventures, and I loved the setting of Alderly Edge, which I knew quite well. Even at the time, though, I had slight reservations about them. So it was with some interest that I got a copy of Boneland, described as 'the concluding volume in the Weirdstone trilogy.'

My issues with the originals, which feature a circa 12 year old pair of twins hurled into a Cheshire setting with supernatural goings-on, were two-fold. I was already a huge Lord of the Rings fan and I couldn't help feeling that the svarts that the children discover down the copper mines are extremely derivative of the orcs in the Moria scene in LotR. I also felt that Garner flung in every tradition he could think of in a messy mix. So we had witches, King Arthur and his knights sleeping under the hill to rescue England at its peril, a wizard, the Wild Hunt and even a chunk of Norse mythology.

So what of the 'sequel'? First the good news. Boneland is an interesting book in its own right, I love the way Garner weaves in Jodrell Bank (visible from his house), and the character Meg is superb. Colin, one of the twins from the original books, now middle-aged, is less appealing (and, I'm sorry, but Garner got his surname wrong. It just sounds wrong.) But the claims on the cover are downright fibs.

Not only is there no way this is the concluding book of a trilogy - it has no similarity of feel to the first books - Philip Pullman's comments on the rear are highly misleading. He calls it a resolution of the stories of the first two books, and says those who were young when they came out (as he and I both were) 'won't be disappointed: this was worth waiting for.' Actually I was hugely disappointed. The first books didn't need a resolution: the apparent cliff-hanger that links them and Boneland isn't in the original books. And this is anything but a resolution. Let me try to explain why have problems with this book.

One is inconsistency. Having said that the original books were a real mish-mash of legends and traditions, at least there was some consistency of having a medieval English feel (with a touch of Scandanavian) to them. Apart from the use of crows, there is hardly any overlap with the mystical content of this book, which is all cod-Stone age. And there is so much of that. I really had to fight myself not to skip over the huge chunks of mystical waffle to get back to Colin and Meg, because it is deliberately obscure and unsatisfying.

It didn't help for me, and I know not everyone will agree, that it was cod-Stone age. I have real problems with this particular style. I found the same experience with Michelle Paver's Wolf Brother books. The thing is, if you use an existing legend - like the Wild Hunt - you are tying into a true tradition, and that gives a story real resonance. But we have no idea what Stone age religion was like (or even if they had any: it's all supposition). So people make guesses from cave paintings. But it always feels really false and strained to me. But most of all, as already mentioned, what we find here has nothing to do with the mythos of the Weirdstone books.

So, all in all, a disappointment. Not a bad book, by any means. But it doesn't do what it says on the tin.

You can see more on Boneland or buy a copy (if I haven't put you off - note I did say it was an interesting book in its own right) at Amazon.co.uk and Amazon.com.
Using these links earns us commission at no cost to you

November 02, 2015
The Internet has gone mildly bonkers over a child in America who was marked down in a test because when asked to work out 5x3 by repeated addition he/she used 5+5+5 instead of 3+3+3+3+3. Those who support the teacher say that 5x3 means 'five lots of 3' where the complainants say that 'times' is commutative (reversible) so the distinction is meaningless as 5x3 and 3x5 are indistinguishable. It's certainly true that not all mathematical operations are commutative. I think we are all comfortable that 5-3 is not the same as 3-5.  However. This not true of multiplication (of numbers). And so if there is to be any distinction, it has to be in the use of English to interpret the 'x' sign. Unfortunately, even here there is no logical way of coming up with a definitive answer. I suspect most primary school teachers would expands 'times' as 'lots of' as mentioned above. So we get 5 x 3 as '5 lots of 3'. Unfortunately that only wor
22 comments
Read more