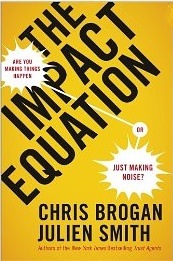 I've kindly been sent a review copy of Chris Brogan and Julien Smith's The Impact Equation by those nice people at Penguin (henceforth Random Penguins).

I used to write business books (this kind of thing), but I always find it strange coming back to them after being so immersed in popular science, because a popular science book is usually so packed with fascinating information, where the actual content of business books is often incredibly sparse, with about a page's worth of useful information packaged in a whole load of woffle. Interestingly, a while ago, a company did try to do business books on two sides of a sheet of laminated A4. They genuinely did get everything in, but even though people are supposed to want bite sized chunks these days, they wouldn't pay a book price for something so slim. We are victims of our own greed.

The Impact Equation doesn't entirely escape the limitation of having a lot of padding between gems, but it definitely does have some good content. It describes using modern communication channels, essentially the internet, in order to get noticed and achieve things rather than, as the subtitle says, 'just making noise.' The authors point out that just setting up a blog, say, and expecting it to make you widely noticed is a bit like running a seminar and only advertising it inside the venue. You won't get many people turning up.

The equation in the title is the rather corny one that Impact = C x (R+E+A+T+E), where C is contrast and the others are reach, exposure, articulation, trust and echo. You'll have to read the book for the detail of what these are, but they do mostly make sense, though there's the inevitable feeling that the categories have been stretched a little to fit the acronym. Along the way the authors make some very good points that may not be original, but that so many people get wrong. So, for instance, you don't get impact from constantly blogging about what you are trying to sell or tweeting your products 24/7. You need to create content that works with the relevant medium and that people actually want to consume.

There was a really interesting programme on the radio the other day about the slender man phenomenon on the internet. I confess I had never heard of this, but it's basically a story that has gone rogue, taking on a life of its own and becoming a kind of internet myth. One of the contributors made the point that we have gone through what he calls the Gutenberg Parenthesis. This is grandeous-academic-speak for the simple but powerful observation that for all of human history we have had individuals communicating stuff (stories or whatever) directly to other people or groups of people. The printing press took us into a side world where the stuff communicated was set in concrete (or at least paper), without the directness of communication. But now the internet has brought us back into the historical mainstream of direct links. Brogan and Smith don't mention this but I think it underlines everything they say. All their wisdom on good ways to enhance impact is about being aware of this different, more personal type of communication - even if you are tweeting to several million followers.

I did have a few issues with the book. The authors are constantly referring to 'Chris did that' or 'Julien once did this'. I know they are trying to connect with their audience, but as a reader I really don't care about them or want to know about them. I just want the good stuff to make my online impact better. I got really fed up of this self-referential approach. They also clearly haven't read (or at least haven't absorbed) the message of the Black Swan, apparently thinking that you can somehow learn to be another Richard Branson (say). I don't agree with a lot that Taleb says in that book, but his central point that you can only achieve mediocrity as a result of ability in fields like this, and the rest is down to uncontrollable luck (I crudely paraphrase) is incredibly important. You can't learn how to be another Branson by emulating him, nor can you learn how to be another internet sensation by emulating an existing one. Black Swans aren't like that.

There's also one point the authors miss, which is that the internet is international, and it is very easy to assume that your world view (typically a US one) will work everywhere. They unintentionally demonstrate this very well with this blooper: 'BBC viewers may become upset if something interrupts Coronation Street.' This misses the point anyone in the UK could have corrected that Coronation Street (the UK's most popular soap opera) is not broadcast by the BBC, but by its commercial rival ITV.

Overall, then, if you are struggling to know how to go about improving your impact through the internet this is a good place to start. But like practically every other business book, do expect to have to wade through a lot of padding to find a collection of nuggets that would probably fit on two sides of a sheet of paper.