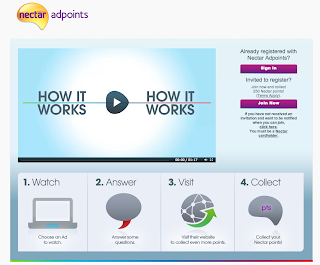 We're all familiar with pay per view - the idea of paying money to watch a sporting event or whatever on TV, but now there's the inverse. Paid to view. An opportunity to be paid to watch those miniature masterpieces known as adverts.

At the moment, apparently, you have to be invited, but soon I think anyone will be able to pop along to the Nectar Adpoints site and be made rich beyond their wildest dreams by watching a few ads.

Okay, I exaggerated a bit. A lot. All the payments are in Nectar points (which as cunningly worth half as much as pennies, so the impressive-sounding 500 nectar points is £2.50). There's an up-front joining award (currently 250 points), then you get an amount for watching an ad (typically 4 points), another 4 points for answering a couple of multiple choice questions and a bonus point for clicking through to the manufacturers website. So that's typical 9 points, or 4.5p per ad. As most ads lasts 30 seconds, allowing another 30 seconds for faffing around with the questions that's £2.70 an hour, rather below minimum wage (though I suppose it's more fun than working in McDonalds).

The question that fascinates me is whether or not this process gives any real benefit to the advertisers, who presumably are paying for the privilege. And funnily I would suggest it doesn't, because of the way Nectar has decided to make sure you are actually watching the ads. Some time in every 20 to 30 seconds they pop up a little box on the screen. The viewer then has to click the box within 5 seconds or the ad starts again. I can see why they do this, because they don't want you starting an ad then doing something other than looking at the screen. But I still think it's a bit of a shot in the foot.

To see how the system worked, I did try out a few ads (the things I do for my readers...). To begin with I was treating it like a very slow video game. Wait for the box to come up and click it. But after a few ads I actually watched one or two of them I hadn't seen on TV. And found every time I actually watched the ad, I missed the box and had to start all over again. So the only way I could get my magnificent reward was to not watch the ad. Of course it is possible to do both with a bit of practice, but I did find the more interested I was in the ad, the more likely I was to forget to click the box, and so got irritated with the advertiser - surely not what they are trying to achieve.

Time, I think, to rethink the attention checking mechanism!