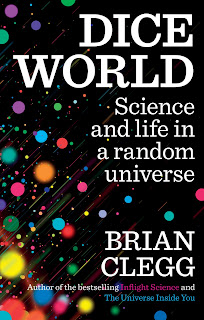 One of the key points in my new book Dice World is something of a truism in the scientific world - and yet it's something that constantly trips people up (in the case of the example we've got here, literally). It's all to do with the way we interpret numbers - something that is crucial to science, but that we also do frequently in everyday life. And there we hit a problem. We interpret the world around us through patterns - and all too often we see patterns where they don't exist. If, for example two numbers move in a  similar way (they are correlated) we tend to assume that there is a cause that links the two (causality). And its very easy to forget the scientists' mantra 'correlation is not causality.'


It isn’t just the person in the street who can confuse correlation with causality. In 2004 a Swedish scientist called Jarl Flensmark published an academic paper titled Is There an Association Between the Use of Heeled Footwear and Schizophrenia? What is disturbing is that despite apparently asking a question in the title of the paper, he presents the hypothesis in the text as if it were a statement of fact: ‘Heeled footwear began to be used more than 1,000 years ago and led to the occurrence of the first cases of schizophrenia.’ Flensmark then shows a parallel between the growth of heeled shoe production and an increase in the prevalence of the disease.

We are told that the first known examples of heeled shoes were in Mesopotamia, as were the first institutions for mental disorders. A whole string of European royals are listed as possible victims of schizophrenia and who were also known – or at the very least thought – to have worn heeled shoes. Flensmark notes that it is the upper classes around the world that typically wore heeled shoes first – and it is the upper classes who were more likely to report symptoms that would now make doctors suspect the existence of schizophrenia. The pattern, Flensmark suggests, is simple. After heeled shoes are introduced, the first cases of schizophrenia appear, and as wearing of the shoes grows more popular, so do the frequency of attacks of the disorder. Simple cause and effect.

Flensmark comes up with an ingenious, if rather intricate explanation for why walking in such shoes could have an influence on the brain. But there are so many opportunities here to confuse correlation and causality. Heeled shoes have, as he suggests, typically first been taken up by the upper classes, because they are impractical, and the appeal of impracticality usually only develops once you don’t have to worry about where your next mouthful is coming from. Wearing such shoes also will tend to increase as society as a whole gets wealthier and more sophisticated. Yet the trappings of class, wealth and sophistication are also more likely to result in more reporting of illness, mental or otherwise. If life is a constant struggle, you either die or you get on with existence despite any illness. In a primitive society like medieval Europe, there is no medical safety net. Being seriously ill and staying alive is a luxury only available to those who can afford it.

What seems to be recorded here are two separate causal links, which when combined result in an unrelated correlation. It seems entirely reasonable that wealth and being of a higher class cause the increased wearing of heeled shoes. And it also seems likely that wealth and being of a higher class produced increased reporting of the symptoms we associate with schizophrenia. But there is no reason to deduce that the shoes caused the mental illness. In fact if there were a causal link, the more obvious one might be that schizophrenia caused sufferers to be more likely to wear heeled shoes, which are hardly a rational piece of footwear. There are, no doubt, many other potential causal structures as well, but the point is that an academic has made an assertion of causality despite there being absolutely no real grounds for making it. Humans – even academics – need their patterns.

Whenever someone tells you on the news, or even in an academic paper, that A causes B, make sure they have clearly identified the causal link. Otherwise get yourself a significant pinch of salt.

Find out more about Dice World.