April 03, 2017
For several months now I have had Amazon's Echo devices, with the Alexa voice-operated assistant in the house. To test their effectiveness, I have the two main Echo variants - Echo and Echo Dot, plus a small Phillips Hue smart lighting system to see how the Echoes interact with home automation. I'll take each separately, starting with the full size Echo. 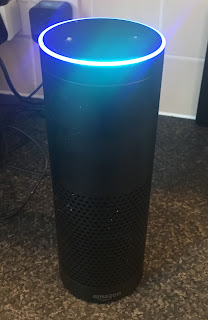 The Echo looks like a wireless speaker until you use the trigger word 'Alexa', at which point a funky blue glowing ring appears on top to indicate it is listening (the glow even attempts to point towards your voice). The Echo can cope with a vast number of 'skills' - responses to voice commands - from playing music to ordering an Uber taxi. Some of the skills are excellent, though I think it's fair to say that 95% of them are either too local to somewhere in America or too pointless to be of any use.

Our most frequent use of the full-size Echo is playing music and radio. We opted for access to Amazon's full 50 million+ music library just on the one device, which costs a reasonable £3.99 a month. This is excellent whether you want to listen to some new release, select a playlist or dig out a prog rock classic. As I demonstrate in the video at the end of the review, it's not so good with classical music, where it struggles with the idea of something being 'by' a composer (as opposed to a performer), doesn't like non-English titles and is too song-oriented to easily select long pieces. There is a way round it - you can set up a playlist on your computer with anything you like in it, then the Echo will play it. There's also easy access to internet radio - say 'Play BBC Radio 4' and you're away.

It might seem trivial, but the hands-free manipulation of music and radio (especially if you're cooking) is very effective. Outside of these uses, our main other ways of employing the Echo is as an information source or for home automation. (No need to Shazam an unfamiliar piece playing from its library, by the way - just ask Alexa who it is and she gives the details.) Among Alexa's talents are being able to read the opening of a Wikipedia entry, giving a local weather forecast, converting Fahrenheit to Celsius (useful if you have a US recipe) and more. She'll also tell you a (bad) joke or respond wittily to some queries. We also use Alexa to set timers, which again is great in the kitchen.

To test home automation, we've tied the Echo in to the Phillips Hue lighting in the utility room next to the kitchen where the Echo is located. It works fine - you can ask Alexa to turn the light on, off or to a desired level. But it's only really an advantage when you're not near the light (you can control Alexa from the opposite end of the kitchen). Otherwise it feels a lot more work than just pressing a switch. Also, Alexa insists on saying 'Okay' when she's done the automation task, which becomes irritating.

Of the other skills that felt like they might be useful, most are just too restricted to be useful. So, for example, I can check the trains on my usual route or the traffic on my usual journey... but I don't commute, so I don't have a usual route. I can order the last thing I ordered from Just Eat... but I can't remember what it was, and usually tweak the order. I can get an Uber... but we don't have Uber here. I can ask Jamie Oliver for a recipe... but not for a specific meal - I have to choose, say, a chicken dish and then hear what's on offer and choose one. Alexa can add items to a to-do list, shopping list or a Google Calendar, but this is quite messy in practice (she can't delete items, for instance) and I don't find I use this at all.

For me the main Echo is worth it as a hands free music and radio speaker, with a bit of info retrieval thrown in. The sound quality is fine for kitchen listening. A definite plus.

The Echo is available from amazon.co.uk and amazon.com
Using these links earns us commission at no cost to you 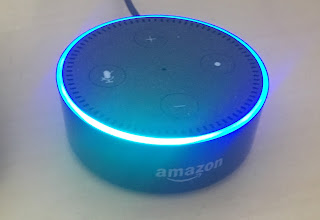 The Dot looks like the top cut off the full size Echo and is extremely good value for what it does. In effect it has the same capabilities as the main Echo, but only a tiny speaker, so it's no better for playing music than a mobile phone. We tested ours in the living room where this limitation isn't too much of a problem, as you can ask the Dot to pair with a Bluetooth speaker (in our case, a TV sound bar) and play through that (once you've set it up, it's simply a matter of saying 'Alexa Connect'), which then produces excellent sound.

In practice, we've found this Echo far less useful. We tend not to play music or listen to the radio in the living room much, so our use is limited to the occasional information request and automation. This is more useful than the single bulb in the utility room, as Alexa is in charge of two table lamps which she can turn on/off together or separately and it is easier to use the automation than going from table to table.

One disadvantage here is that Alexa is quite often fooled by the TV. Several times a week she will leap in, trying to answer a question she thinks the TV has asked her. The first times this happen are decidedly spooky... then it just becomes irritating. Still - it is incredible value for what it does.

The Echo Dot is available from amazon.co.uk and amazon.com
Using these links earns us commission at no cost to you

Although not part of the Echo system, I ought to say a few words about Hue in its own right. This consists of a central controller linked to you wifi and individual bulbs that are also linked, meaning you can control those bulbs from a smartphone app. The system works well with Echo, but also has some great features standalone. From my phone, I can control the light bulbs in the system, switching any of them on and off or dimming them with a slider. (If I had fancy coloured bulbs, I could also do colours, but I stuck to white.)

By default you can only do this within the house, but if you register with Hue's system, you can also do it remotely via the internet. I find the best part of this extended facility is that it can detect when you are coming home and it's after dusk and will automatically switch selected lights on - so you never come home to a dark house.

We have also installed a Hue wall switch in the utility room, which gives on/off and fade controls for that light. The Hue bulbs we have in table lights are easier to control via the app or an Amazon Echo than manually, but the single bulb in the utility room often seemed harder to deal with that way, so now we have the option to do this manually, without disabling the remote control, which would happen if we used the wall switch.

I don't think I'd ever extend it to the whole house - but it's excellent having this available in our test rooms.

Hue is available from amazon.co.uk and amazon.com
Using these links earns us commission at no cost to you

I wouldn't get rid of our home automation, and would happily extend it to include, for example, a smart thermostat. We love our main Echo as a music player/hands free radio, but a lot of the extra 'skills' seem more for show than practical purposes. So it's restrained enthusiasm all round.

Here's that video again, attempting to get Alexa to play Schoenberg's Verklärte Nacht: