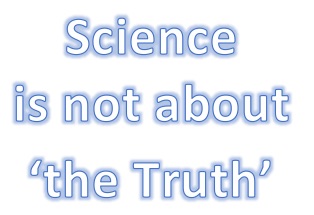 This article first appeared in the 17 April edition of The Big Issue under the title The Whole Truth.

We live in a world of alternative facts. Paradoxically, these arise because political and religious leaders, driven by belief systems, base their actions on what they believe to be 'truths'. By contrast, science, shockingly to some, is not concerned with absolute truth.

Scientists establish the best current theory, given the available evidence. These results are subject to revision as new evidence comes to light. Science is always provisional. This is why scientists often struggle when pulled into political debates. A good scientist avoids the absolute certainties politicians want to hear, and this is interpreted as weakness. The reason scientists do this is that are aware of their frames of reference.

A ‘frame of reference’ is a physics concept - it's at the heart, for example, of relativity, and is about establishing the position from which we look at the world. This is essential, because varying viewpoints give radically different outlooks. Science is unique in offering a clear, analytical frame of reference, based on evidence, rather than belief or opinion. And unlike the politician or religious leader, scientists will change direction when good new evidence contradicts long-held theories. It's ironic that Margaret Thatcher, one of the few senior politicians with a scientific background, was so dismissive of U-turns - because science demands U-turns when the evidence supports them.
This doesn’t make science perfect. Scientists are human beings. Individual scientists can stick with their pet theories in the face of strong contradictory evidence. But science has unparalleled self-correcting mechanisms which, over time, bring theory into line with data.

Science, itself, is sometimes called a belief system. And we certainly have to take many things that scientists tell us on trust. None of us can duplicate the experiments of the Large Hadron Collider, or assess the detailed evidence for climate change. However, by trusting in science, we have the confidence that what we hear is not driven by words of authority written in a book, nor by political theories pulled out of thin air. It is based on our best understanding of the world, with theories that are tested repeatedly against evidence. Most importantly, science delivers. It is because of science that we can cure many diseases, use technology that enables to interact with others around the world or get on a plane and fly through the sky.

By contrast, the beliefs of politics and religion are rarely evidence-based. This might seem unfair. A belief might be based on testimony. Equally, a political theory can derive from the life experiences of a politician. Unfortunately, though, the evidence here reflects single experiences in a messy everyday life. What makes scientific evidence far better quality is that it is based on carefully controlled experiments which are reproducible, producing the same results when someone else repeats the experiment. Until this is the case, the evidence is insufficient to change the best current theory.

This is where the media often misrepresent science. We are constantly bombarded with press articles telling us about scientific research. One day we are told, for instance, that red wine is good for our health... the next that it causes cancer. Leaving aside the reality that both apparently contradictory results can be true - it's entirely possible for a complex mix of chemicals like wine to contain substances that are good and bad for us – the media reports truncate the scientific method. They are presenting the result of a study as if it were a theory. But to be worthwhile, a theory requires far more evidence than a single piece of research.

If more of us engaged with science and its methods, we would have a better chance of holding those who peddle alternative facts to account. Sadly, secondary schools put many off science. When I talk to junior school children, they all love science. But by 13-14 many have been turned off. Secondary curriculums are designed more to give students the Victorian basics than insights into the nature of modern science. Yet without the right frame of reference it’s difficult to understand the science-based decisions our politicians make. We don't all have to become scientists - it would be a boring world if we did. But all of us can enjoy reading about science, and finding out more from videos and talks.  With a better frame of reference, we can appreciate the realities of science and its importance to humanity.

Read more on frames of reference in Brian's latest book The Reality Frame.