Danny Dyer is not so special 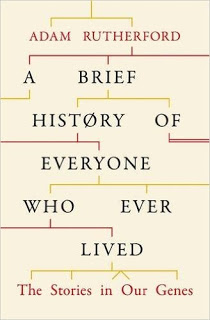 To be honest, I don't really know who Danny Dyer is, but I was forced against my will to watch some of the BAFTA TV awards last night, and one of the clips featured him being gobsmacked that he was descended from royalty, as if this somehow makes him special. It really doesn't.

Let's be clear, this isn't about my anti-monarchist leanings. What I mean is that I can guarantee that you are descended from royalty too.

There's a fascinating bit in Adam Rutherford's book A Brief History of Everyone who ever Lived that shows that if you have European blood, the chances of you not being descended from the Emperor Charlemagne are negligible. (Don't worry if you aren't at all European - you'll have a royal lineage too.) In fact you are a descendent of everyone alive in Europe in the 10th century who has living relatives now. So, if you prefer your royalty British, provided they have living relatives, you are a descendent of Alfred the Great, Rhodri the Great, almost certainly Macbeth (he's just a little late, but I had to go with him) and Brian Boru.

So, please don't bother to get excited about being descended from royalty, Danny. We all are.
genealogy genetics rubbish science TV shows