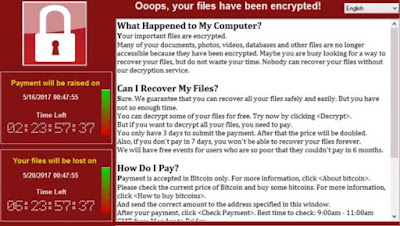 You can't escape the WannaCry ransomeware attack in the news. And it's a good thing that there has been plenty of coverage. But I do wish the news concentrated a bit more on how you can keep yourself safe and less on trying to find someone (other than the hackers) to blame. There are three things that everyone should do, any of which would have prevented data loss, and two of which would have prevented the attack succeeding in the first place.
Although not about direct prevention, there are a couple of other minor things. Some were probably hit because they were running versions of Windows like XP that are so old that Microsoft no longer updates them. I know this can be tempting, especially when the alternative is the awful versions of Windows that have been issued lately. But there comes a point when you have to move on. One of the reasons some don't is because Microsoft has typically charged quite a lot for new versions of operating systems. This, arguably, is another reason for switching to Apple (which doesn't). Not to mention the lower levels of attack on Macs. (If you have a Mac, though, don't fall into the trap of thinking you don't need anti-virus - you do. I'd recommend the free Sophos product.)

Don't let the news of the ransomware be just a pleasant distraction from the election, or a frustration if you are worried about an NHS appointment. Make sure you keep yourself protected too.
IT security technology