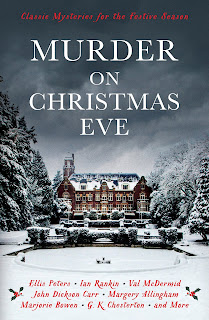 After my disastrous adventure of reading Murder in the Snow, I'm glad to report that I had a much better time with Murder on Christmas Eve.

This is a collection of Christmas murder mystery short stories. Generally speaking, murder mysteries don't do so well in short story form as, say, science fiction. It usually takes rather more page count to be a success in this genre, but this collection, from big names in the field, manages to do the job well. It's notable that the Father Brown story is probably the one that works as a pure murder mystery and is significantly longer than most of the others.

However, just because many of the others are quite short doesn't mean that they fail as stories, just that they tend to focus on a relatively small element of the 'how could that have happened?' nature and make it work very well indeed. The styles range from the modern touches of Ian Rankin and Val McDermid to a classic little Campion tale from Margery Allingham - but they're all (with one possible exception) well written, a delight to read and firmly set in the Christmas period.

If you're looking for some light Christmas bedtime reading with a criminal bent, this could be the one for you.

Murder on Christmas Eve is available from amazon.co.uk and amazon.com