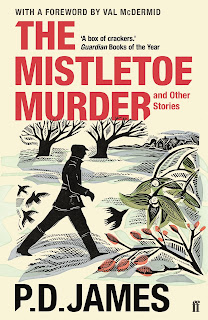 Still on my search for the perfect Christmas murder mystery, my next port of call is with one of the top names in the business, P. D. James.

You know when you get a book with just four short stories in at (admittedly relatively meaty ones) that it was intended as a gift book - but in the case of this collection of four Christmas-set P. D. James stories it is certainly a worthy addition to any list of seasonal favourites.

There is no doubt that James very deliberately sets out to push the boundaries, and though some of the stories have very traditional, Agatha Christie style country house and snow settings, there is a darker feel here. In two of the stories, she adopts the same approach that Jane Austen used in Northanger Abbey of stepping outside the fictional viewpoint to make knowing remarks on the format to the reader. So, for example, in The Twelve Clues of Christmas, she remarks that Adam Dalgleish felt he was 'involved in one of those Christmas short stories to provide a seasonal frisson for the readers of an upmarket weekly magazine' - this being a story James wrote... for an upmarket weekly magazine.

Despite this playfulness, these are stories with plenty of interest and effectiveness as mysteries. Two feature a young Adam Dalgleish, allowing us to get snapshots of the earlier career of her great detective. The plots are generally as satisfying as is possible in a short story and the twists and turns suitably unexpected. Like the Sherlock Holmes stories, these are long enough short stories to get enough in, without wasting too much effort on character building and scene setting.

My only real criticism is that I would have liked the book to be at least twice as long - but it certainly fits well as a useful addition to the Christmas reading pile.

The Mistletoe Murder is available from amazon.co.uk and amazon.com
Using these links earns us commission at no cost to you

... and if you're still hunting, my murder mystery novel A Timely Confession is also a Christmas-set mystery.