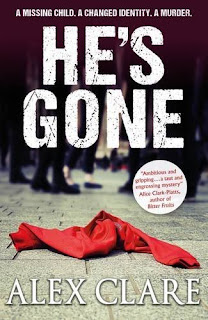 I'm always on the look out for good new British crime fiction and someone recommended He's Gone by Alex Clare. To be honest, this meant I bought it without looking at too much of the detail, and my first reaction on taking a closer look was one of disappointment.

The reason for this negative reaction is that it has become such a cliché for police officers in crime novels to have a personal problem - and the protagonist here, DI Robyn Bailley, looked likely to be exactly such a cliché. But I am pleased to say I couldn't have been more wrong.

Firstly, He's Gone works superbly as a police procedural. It's always difficult to get the balance between giving too much detail (because in the end, most police procedure is boring) and making the whole thing trivially easy. The crimes - a missing toddler, a 3-year-old murder and a series of burglaries - are handled by Clare in a way that simply keeps the interest throughout. It's an excellent book on that level alone.

But then there's the personal problem. Because Robyn Bailley was DI Roger Bailley a couple of weeks early and is beginning the transition. It's hard to imagine any job where it would be harder to be transgender, and this is made doubly so when the first case causes the investigating team themselves to be under the media spotlight. Just for once, this feels like a personal problem that isn't thrust on the main character to tick a box - it's a major part of the narrative, and like the police procedural aspect, Clare handles it beautifully.

The only negative I'd say is that while many of the characters are well rounded, the mother of the missing toddler is a two-dimensional, cardboard cutout of a nasty person with no saving graces, which is a shame.

Overall, though, Clare's book is the best crime fiction discovery of the year for me and I'm rushing out to buy the sequel.

He's Gone is available from Amazon.co.uk and Amazon.com.