Review: The Nanny State Made Me - Stuart Maconie 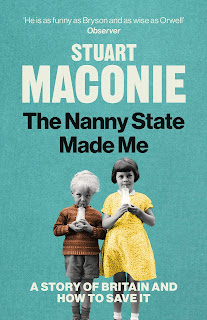 I am a great fan of Stuart Maconie's UK travel/music industry books (I confess that, coming from Rochdale to his Wigan, he paints a picture I love). In many ways he has surpassed Bill Bryson, which is saying something. But the one thing I've never been comfortable with is his political alignment. If I position myself as closest to New Labour, he has always felt to the left of this. Of itself it's not a big issue, but I've particularly struggled with his romanticisation of the working class life.

My dad's parents were mill workers in Rochdale most of their lives (my grandad had to play professional cricket to make something to live on when they were laid off in the early 30s). And one thing they always stressed to me - the first in my family to go to university - was that they hadn't wanted the same life for my dad and me. They saw nothing romantic and noble in mill work - it was a means to live and no more.

It's not to say that I don't share Maconie's dislike of those who turn their noses up at Northerners or working class traditions and lifestyles. But it made me a bit wary of taking on this book (sorry it's taken me so long to mention the book). However, I shouldn't have been. It's a well-deserved counter to those who would pull apart the support net of the state. Maconie takes us through the NHS (of course), state schools, buses and trains, the dole, public utilities, public parks, the BBC and more. He's affectionate but never blinkered - happy to point out the failings of state-run organisations, but equally able to make it clear how the alternatives have proved worse.

I was surprised how often I was already aligned with his thinking, despite being to the right of him politically. It helps that he's prepared to actually think things through rather than react in a knee-jerk fashion. So, for example, rather than take the usual 'the BBC is inherently tied to the licence fee and to get rid of it would destroy it' approach many take, he admits to coming round to a subscription model because - paradoxically - it would free up the BBC to stop trying to be everything to everyone (and so putting out a lot of mediocre programming) and to concentrate on what it does best.

Where I hadn't seen eye-to-eye previously, Maconie mostly persuaded me to his viewpoint - which I found remarkable. For example, like him I am grammar school educated, but am totally in favour of comprehensives. But I'd always thought having private schools was an acceptable hat tip to choice, where Maconie makes very strong arguments as to why they should be at minimum relieved of their charitable status and preferably got rid of.

Another example of him winning me over is on re-nationalising the railways. Two things have always made me suspicious of this. I can remember how awful British Rail could be (where I quite like our local GWR franchise). And I worked for a nationalised company (BA) that went private and it was so much better after privatisation. But BA has real competitors on its routes to restrain its business practice, where the privatised railways don't. I can now see it just doesn't make sense to have private railways companies (or utilities for that matter).

A remarkable book, then. My only regret is that there isn't a bit more of the travel writing - Maconie manages to incorporate a bit, but not as much as I'd like. Since the political message is pretty much the same throughout, it can feel a little repetitive after a while. But this doesn't make it any less an excellent piece of writing - and especially telling at the time of reading when the virus crisis means that the state is having to play a very big part in all our lives. As I write, the Labour Party is about to elect a new leader. But they haven't got the right person standing. With Maconie in charge, they would be unbeatable.

The Nanny State Made Me is available from Amazon.co.uk and Amazon.com