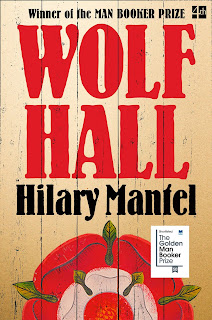 I know practically everyone else in the world has already read Wolf Hall - but I've come late to the party. Oddly enough, the delay was primarily because it won the Booker Prize. That tends to label a book as literary fiction, and for me that all too often means pretentiousness and a book that is both miserable and a pain to read. However, I saw a review of Hilary Mantel's third book in the series which praised Wolf Hall for its humour. That pushed me over the edge - and I'm glad it did.

Admittedly I do enjoy pretty much anything Tudorbethan - it's my favourite musical period, the architecture's great and the whole Thomas Cromwell / Henry VIII / Church of England story is deeply fascinating. I had already read all of C. J. Sansom's Shardlake series set in the same time and place (for example, Lamentation) and had loved those - and I had quite enjoyed the TV adaptation despite a few moans, though that wasn't as well endowed with humour as the book's marvellous dialogue. But Mantel won me over after a few pages. It is a remarkable book that deserves all the accolades it has, both in terms of the handling of story and bringing the period alive.

I'm no historian, so I don't know how accurate it is - but I get the impression it's not bad in this regard. I read somewhere that Mantel did away with the saintly image of Thomas More, though I think, to be fair, Josephine Tey had already done that to the limit in her fascinating if sometimes rather dull The Daughter of Time. More to the point, though, Wolf Hall is a wonderful novel.

I do have one issue I need to briefly moan about, which is perhaps the only way in which the author seems to have consciously attempted to be literary in her approach. She insists on referring to Cromwell as 'he', even when convention has it that 'he' should refer to the male person most recently mentioned. A classic example was 'Norfolk will preside. He will tell him how it will be.' That first 'he' is not Norfolk, but Cromwell. I lost count of the number of times I had to go back and re-read a paragraph to work out who 'he' was.

Moan over. Loved it. Having a break with a couple of other books (it was quite long), but then I'm diving into volume two.

If, like me, you are one of those rare people who hasn't read it, Wolf Hall is available from Amazon.co.uk and Amazon.com