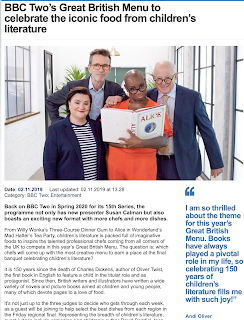 Like most media outlets, the BBC is obsessed with anniversaries, but they've really stretched credulity with their latest - The Great British Menu features a banquet celebrating '150 years of children's literature' - which is clearly baloney (something I've never seen consumed on GBM).

I ought to say first of all that I'm a fan of the programme, not only because my illustrious Christmas University Challenge teammate, Matthew Fort is one of the judges. I'm not knocking the programme itself - I suspect this bizarrely arbitrary number was imposed by hierarchy (I can just imagine an episode of W1A when the planners meet and come up with this pseudo-anniversary).

Why is it baloney? Well, clearly children's literature is older than this. The Fairy Tales of the Brothers Grimm, which despite being distinctly dark were certainly intended for children (the original title was Children's and Household Tales) date back to 1812, over 200 years.

Ah, the BBC says, but we're talking books first published in English. Okay, well Alice's Adventures in Wonderland (amusingly featured in the publicity shot on the BBC's media website) was published in 1865, and that's 155 years ago - and it certainly wasn't the first.

Okay, the BBC comes back, but Oliver Twist was the first book with a child protagonist. Two problems with this. One is it's not children's literature - it was definitely written for an adult audience. And secondly it was published in book form in 1838. So it's the 182nd anniversary of that.

Tongue removed from cheek, children's literature is a great topic for them to use as a theme - but I really wish they hadn't made up this totally spurious anniversary.