Knit your own coffee (sort-of) 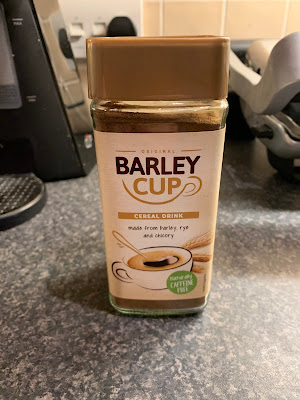 I have always been very wary of non-coffee substitutes for the real thing, and wouldn't normally think of buying any. However, we get a monthly goody box of odd products that manufacturers are trying to get people aware of, so sell relatively cheaply - the latest including this stuff called Barley Cup. To my surprise, it's not bad. Not great, admittedly, but not bad either.

Its main ingredients are barley, rye and chicory. When I saw the C word I was distinctly nervous, having been exposed to the horror that is Camp 'coffee' in my youth. But it only seemed fair to give it a try.

First impressions is it's a kind of anti-coffee. With real coffee, by far the best thing is the smell - the taste is definitely a relative let-down. Here the smell is... well, odd. Certainly not coffee. Not particularly unpleasant - perhaps roasting barley - but not coffee. The taste, however, is not unlike a cheap instant coffee.

As a drink it's warm and wet (as they say), but is never going to thrill. It is no substitute for a pungent, real coffee. But I find too many real coffees upset my stomach, so I tend to drink one or two instant ones a day as well - and this stuff really isn't worse than those, with the advantage that it never had any caffeine in it, rather than being decaffeinated (not always a brilliant process), and also doesn't have all the other slightly dodgy natural chemicals that may well be why coffee upsets my stomach.

One tip if you decide to try it - don't be stingy. You need a good two heaped teaspoons in a mug to get a reasonable outcome. This does mean it's quite expensive compared to instant coffee, with which it's similarly priced by jar size.