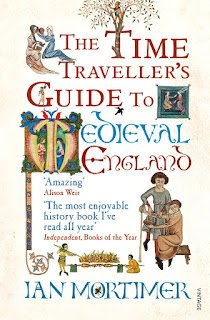 History is one of those subjects that ought to be fascinating, but all too often is dry and dull. Ian Mortimer had the excellent idea of doing a series of 'time traveller's guide's - telling you what you will experience on a visit to medieval England (here considering roughly 1300-1400).

As you might expect, there's a fair amount of dispelling of clichés about the period, while at the same time showing that others have a reasonable basis. It really was dirty, smelly and often nasty for many, yet there was also, for example, a surprisingly high level of literacy in the middle and upper classes. The class divisions are stark and multifold, both interesting as (as we will see) producing the biggest problem for Mortimer in making this book approachable.

I was particularly shocked by the statistic that the population of England halved in the period, primarily down to a series of waves of plague. And this was in a population that seems tiny now. Mortimer lists the estimated population in 1377 of the biggest towns and cities by size. London tops the list with 40,000. By the time we're down to number 10 on the list (Boston, in Lincolnshire), it's 4,800. Cambridge, for example, struggles in at number 21 with 3,200 people - a population that we would see in a reasonable-sized village today.

Traditionally, history has been accused of focusing too much on royalty and nobles. That's all in here, but there's plenty all the way down to the lowest villein, with lots of enjoyable little details (like women not using side saddles, as we might imagine). The detail is both the book's delight and its failing. We like to get intimate little details, but Mortimer feels it necessary for each of the areas he looks at (from what to wear through to eating and drinking) to detail what what would apply for each of the levels of the hierarchy - something that after a while gets occasionally tedious. I think it might have been better had he followed a real guide book more in being prepared to just focus in on some areas (perhaps varying from topic to topic), rather than trying to be comprehensive. (My favourite old guidebook, England on 10 Dollars a Day, for example is decidedly selective on where it covers.)

What is certainly true is that this book would be a boon for anyone writing historical fiction set in the fourteenth century or thereabouts. It is wonderfully rich in detail. I did enjoy it and do recommend it - but sometimes, reading it felt just a bit too much like doing my homework.

The Time Traveller's Guide to Medieval England is available from Bookshop.org, Amazon.co.uk and Amazon.com.