How to Stop Fascism - Review 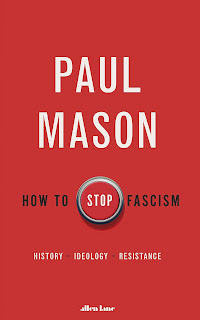 The author, Paul Mason, always came across as a thoughtful presenter on the TV, but released from the constraints applied to broadcast news, his unashamed Marxist viewpoint shines through in this history and analysis of the threat of fascism.

I found the historical aspects really interesting - we did the Second World War as part of history when I was at school, but there was very limited material on what drove the rise of Fascism and how it operated. I also found Mason's expectation of a second major rise of Fascism and analysis of what to do about it interesting, but in a different way - here it was more an opportunity to see how an intelligent person's thinking can be painted into a corner by his ideology.

For example, Mason spends a considerable amount of time exploring why the left failed to stop the rise of fascism in Italy and Germany - but doesn't touch on the more useful potential of why fascism failed to take off in the UK, which would be a far better source of lessons - one probably being the lack of Marxism in mainstream UK politics. Similarly, Mason links the right wing with violent language on social media leading to fascist action, yet this does not fit with the reality that you are much more likely to find hateful language on social media from the left aimed at the right than vice versa. The left tell us they hate Tories, the right that they disagree with Labour. And Mason rightly berates the far right for its antisemitism, conveniently forgetting that the left has had more problems that the right with antisemitism of late.

Occasionally I found Mason's views distinctly amusing. He tells us 'The ideas of these self-styled "philosophers" of the far right are not simply grotesque: they would not last five minutes if subjected to the rigours of logic and analysis in an actual philosophy department. That's why they communicate in obscure, long-winded and unintelligible prose. However, they are persuasive.' Leaving aside how anything  unintelligible can be persuasive, no doubt what he says about right wing extremists is true - but has he ever read the obscure, long-winded prose produced by many academic philosophers? It's hardly a discipline that specialises in a clear, comprehensible writing style.

Another hilarious lack of understanding came when Mason says 'At this stage Thiel, despairing of a political solution, urged libertarians to create communities of survival not resistance; this is the rationale for Silicon Valley's obsession with building undersea cities and space travel.' No, it's because they're science fiction fans.

One final quote that produced a raised eyebrow. Mason tells us 'Large numbers of people experienced the years after 2008 not just as economic dislocation but as a crisis of identity. They asked: if I am no longer a consumer, or an atomized individual in a competitive marketplace, defined by the brands I wear, the car I own and the credit card in my wallet, who am I?' It does make you wonder if Mason has ever spoken to a real person outside academia. I can honestly say I have never met anyone who has asked this.

Underlying the issues with this book is a problem I see all the time in undergraduate essays - stating 'A therefore B' without presenting any evidence that A causes B. For example, he repeatedly over-simplifies developments such as Brexit, linking them to Trump in the US and racism without having good justification for this. Sometimes this results in statements which it's hard to link to reality such as 'Tory leaders openly celebrate Britain's history as a slave power.' Like those undergraduates he can be quite poor about defining terms before he uses them. For example, he refers to the 'working class' all the way through the book, but it's only about three-quarters of the way through that he defines what it means in a modern world, where the original concept is a very poor fit to the reality.

All in all an interesting book that is thought provoking, but it would have been better written by someone who doesn't still believe that Marxism has the answer to everything.

How to Stop Fascism is available from Bookshop.org, Amazon.co.uk and Amazon.com.