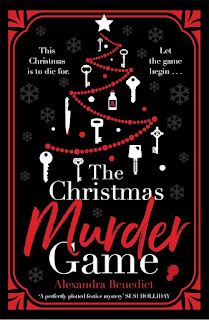 Around Christmas, a good murder mystery goes down well - and all the better if it's set at Christmas time. I've got mixed feelings about this one. It's an entertaining premise - various family members stuck in a country house, with a clue to solve on each of the twelve days of Christmas. The winner of each gets a key, one of which will take them to a secret room where they can claim the title deeds of the house. And the book is reasonably readable. But there are some issues.

The first person central character, Lily, spends far too long agonising over life, the universe and everything. In fact, she's a bit of a misery. Right at the start she is given a way to just have the house and end the whole thing, but doesn't bother for no obvious reason. Meanwhile, the storyline, which involves several deaths without anyone doing much about them, seems far-fetched to say the least. The 'clues' in the form of a sonnet a day are pretty much unguessable by the reader. And the whole motivation for the various crimes that feature seems totally out of proportion to the potential reward.

Add in a tendency to floweriness in the writing and some far-fetched similes (for example 'the sky is the cold dark blue of flames ticking a Christmas pudding' and 'the Yorkshire lanes don't help - artery-narrow, hedgerows encroaching on the road like bad cholesterol' are packed into the same short paragraph) and it can be hard work sometimes. But then, Christmas is a time when we want to turn off and don't necessary need excellence: I quite enjoyed the book despite its flaws.

Fated is available from Bookshop.org, Amazon.co.uk and Amazon.com.