The Mysterious Case of Father Brown 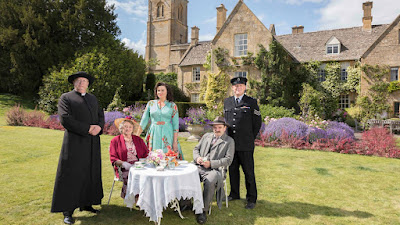 For many years I've been fond of G. K. Chesterton's Father Brown books. Brown is quite different in feel to his pre-war contemporaries such as those in works by Christie and Allingham. This mild-mannered, sleuthing Catholic priest relies on his experience of human nature, while justice weighs heavier than a strict interpretation of the law. But a TV adaptation has highlighted a strange anachronism that turns up surprisingly often in detective series.

Since 2013, Father Brown has appeared in daytime TV programmes on the BBC, though the stories are largely detached from the originals, in part because the series was moved to a postwar Cotswolds village, and, as often is the case with TV versions of literary detectives, other regular characters were added to the cast. The move to a fixed village location is useful to establish those regular characters, but it throws up the worst version I've ever seen of an incoherent anachronistic setting.

Period dramas like this - even cheapish daytime ones - often go to significant lengths to ensure that details of the setting are accurate. So, for example, a recent episode featured a copy of the Asimov book Second Foundation. Father Brown uses this to roughly fix a date, as the book 'only came out last year' - which would fit with the circa 1954 setting. Yet there is one glaring oddity.

A weaker example of this occurs quite often when dramas, especially murder mysteries, feature a church. For arts sake, the production people like to use old church buildings, yet for reasons of plot or simply to provide more dramatic fixtures and fittings (the inevitable confessional, for example), the buildings are decked out as Catholic churches. To put a Catholic church into a medieval English building would be like claiming that a first edition of John Donne came out in 1953. It's ignoring all of history since the Reformation - with the odd exception, we simply don't have ancient churches in this country that are used by a Catholic parish.

In the Father Brown series, though, things are taken a step further - not only does Brown have an ancient village church, but pretty well everyone in the village is a Catholic. It's mindbogglingly dissonant with reality, a timeslip from the sixteenth century. Still, the bread bin looks right for 1954, so that's okay.