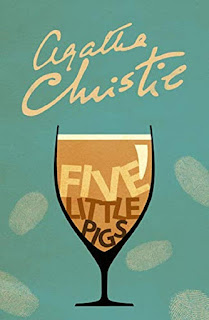 As someone who writes the occasional murder mystery, I am entirely in awe of this book (which I received as a Christmas present). If I'm honest, I've tended to think of Agatha Christie as someone who turned out formulaic potboilers, partly, I suspect, because I've seen them on TV rather than read most of them. I was partly swayed from this view by The Murder of Roger Ackroyd, but the 1942 Five Little Pigs totally changed by view: it is a lesson in how to put a totally different twist on the detective story.

On paper, it shouldn't work - because nothing much happens. The key events took place 16 years earlier. All Poirot is able to do is talk to a few people. There is hardly any narrative development. Yet it is a masterpiece of construction. Poirot's client's mother was convicted of killing the client's father all those years ago - he is asked to find out if it is true.

All the book consists of is an introduction, Poirot interviewing each of the five other suspects, a written statement from each suspect, and Poirot pulling it together. But in that sparse format, Christie weaves in an impressive mix of red herrings and subtle pointers to what really happened.

Don't come to find much engaging drama in this book - but if you like a cerebral murder mystery it is arguably one of the greatest ever written.

Five Little Pigs is available from Bookshop.org, Amazon.co.uk and Amazon.com.