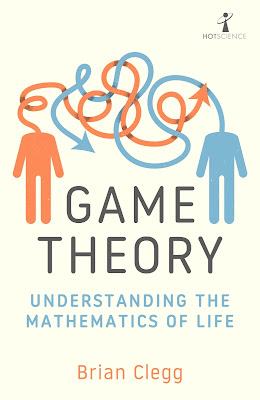 Something that never ceases to be a thrill is receiving my first copies of a new book - so I'm delighted to say that Game Theory, my latest entry in Icon Book's 'Hot Science' series (for which I am also series editor), is now on sale.

For me, game theory, the topic of the book, has always been a fascinating one. Below is an extract from the introduction to show why this is the case and to give a little background on game theory in case it's unfamiliar as a concept.

You can find out more about the book or buy a copy at my website.

1. Games and the real world

When I first bought a textbook on game theory many years ago, never having come across the term before, I felt cheated. I was expecting something fun that would tell me the optimal strategies for winning at card games, backgammon and Monopoly. I wanted an interesting analysis of how the games worked mathematically under the hood. Ideally there would also be guidance on how to create your own interesting board games. Instead, I found descriptions of a series of ‘games’ that no one had ever played, with tables of outcomes that did not so much give guidance as show just how impossible it often was to come up with a useful outcome. This was interspersed with a hefty load of mathematical equations. And yet, the more I read about game theory, the closer it seemed to one of my favourite classics of science fiction.

For his 1950s Foundation series of books (made into a so-so TV show in 2021), Isaac Asimov came up with the concept of ‘psychohistory’. This is an imaginary mathematical mechanism for predicting the future, based on an understanding of human psychology and the behaviour of masses of people. In practice, psychohistory was never going to happen. The repeated failures of pollsters who amass vast amounts of data to predict the outcomes of elections, or decisions such as the UK’s Brexit referendum, make it clear that people form far too complex a system to enable consistent, reliable mathematical predictions of outcomes. Yet game theory does achieve some of the promise of psychohistory by resorting to the classic approach used by science, particularly physics: modelling.

The mathematical models used in physics reduce complex systems to simpler combinations of objects and their interactions. Messy aspects of the system are often ignored (it will be noted that this is happening). So, for example, Newton’s familiar laws of motion at first glance don’t appear to describe the real world very well. The first law states that an object in motion will keep moving unless acted on by a force. In everyday experience, such countering forces – like friction and air resistance – are ubiquitous; yet for convenience, models often ignore such things, as they add complexity and can be difficult to account for. This means that the model does not reflect reality – without friction and air resistance, once you gave it a push, a ball on a flat surface would roll on for ever. But simplification makes calculations more manageable and gives an approximation to reality. Similarly, game theory uses mathematical models that simplify human interactions and decisions as much as is possible to help understand those processes.

The theory of games started with the development of the mathematical field of probability to deal with gambling games and other pastimes where the outcome was dependent on a random source, such as the throw of dice or the toss of a coin. However, in the first half of the twentieth century, a handful of individuals and a quasi-governmental American institution took some of the basic mathematics of games and began to apply it to decision-making problems, ranging from economics to the best strategy to win a nuclear war.

The field that was developed under the name of game theory became detached from ‘real’ games. It was all about strategy – what was the best approach to win, given a set of choices available to two or more players. Games were transformed from pastimes to something deadly serious. This shift was so strong that often those who deal with game theory totally ignore what the rest of the world calls games. However, I believe that this is a mistake. Real games still form part of the continuum – it is just that many familiar games are not interesting from a game theory perspective, either because they are too dependent on random chance, with no strategy, or because they are too complex for strategies to be developed.