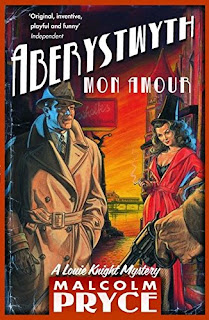 There is now a genre of TV show known as Cymru Noir, modelled on Scandi Noir but with more drizzle - however, Malcolm Pryce, with his Louie Knight mysteries, brought the original American noir genre to Wales in a series of books starting with the 2001 Aberystwyth Mon Amour, that are sheer genius.

Pryce could have simply transported a Sam Spade-alike to the Welsh seaside - and that's certainly part of the attraction of these books, but the deadpan humour derives from the fantastical development of what might be considered Welsh stereotypes of old into the key elements of a noir detective novel. So, for example, the druids replace the mafia as the local gangsters, good time girls wear stovepipe hats, the friendly bartender becomes an ice-cream salesman and the tea cosy takes on a much darker meaning.

This is a setting beautifully brought alive in Pryce's lyrical description of Aberystwyth and its surroundings that will be be evocative to anyone who spent a wet week in a Welsh caravan as a child - but Pryce develops a whole mythos around an alternative Wales where, for instance, the country had its own equivalent of Vietnam in a failed attempt to take over Patagonia in 1961 with an attack force that included two ex-war Lancaster bombers.

I've never seen anything like these books by another author. It's a kind of urban fantasy, dark humour, noir crime genre - but the urban fantasy is not so much driven by magic (although there are witches), but rather by Welsh seaside stereotypes taken to the extreme. Where else could you meet schoolboy genius Dai Brainbocs, who has solved a long-thought impossible theorem that makes it possible to change the lettering part way through a stick of rock, the mysterious, stovepipe-hat-wearing nightclub singer Myfanwy Montez or the sadistic ex-freedom fighter and games teacher Herod Jenkins?

I've just started re-reading my set of these six remarkable books, and am enjoying every moment.

Aberystwyth Mon Amour is available from Amazon.co.uk, Amazon.com and Bookshop.org.