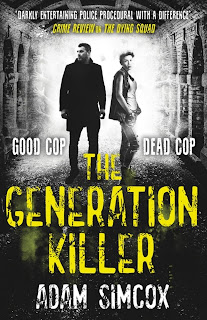 Urban fantasy, which brings fantasy elements into the everyday world, is far more interesting than the totally imaginary setting of a classic fantasy, because the clash between familiar life and weirdness provides brilliant opportunities to stretch the imagination. Of late, some of the best urban fantasies have incorporated a police procedural element - most notably the Rivers of London series. But Adam Simcox inverts the whole approach.

Standard urban fantasy/police procedural crossovers feature real world police coping with fantasy-driven problems. Simcox gives us a refreshing new approach in dead detectives who deal with crimes defeating the mundane police. This is linked into an afterlife that seems loosely based on the Catholic triad of hell, purgatory and heaven, with the main fantasy setting being the Pen, described as purgatory, but in reality distinctly hellish. It’s from here that dead cop Joe Lazarus sets out, making a dangerous transition to our world, which the dead refer to as 'the soil'.

Simcox gives us an impressively layered fantasy realm with its own mind-boggling problems (introduced in the first novel in the series, The Dying Squad). The Pen is run by a 16-year-old (dead) Warden Daisy-May, who struggles with keeping in control as she is new to the job, had little in the way of induction training and is dealing with a realm of rebellious souls and half-souled 'dispossessed'.

The fantasy location of the Pen is interesting (though a reader who hasn’t read the first book might find it hard to get their head around). But the book’s real strength is when crimes are investigated in the real world - this happens in two parallel storylines, with Joe Lazarus pursuing the Generation Killer of the title in a very dark and gloomy Manchester, while the Duchess (Daisy May’s predecessor as Warden) is trying to stop her sister from wreaking havoc in Tokyo. Each of these storylines is strong enough to support a book on their own, and whenever the action moves back to the afterlife, I was impatient to return to the soil.

Simcox has come up with such a rich piece of world building that it can sometimes be tricky to follow the logic - good fantasy (unlike magical realism) has to be internally consistent. It seemed a bit odd, for example, that people in the afterlife could be killed - did they end up in the afterafterlife? Was it turtles all the way down? But in the real world action parts, this feels less of an issue.

The Generation Killer is an original, gripping and gut-wrenching approach to the urban fantasy genre. It works on its own, but I’d recommend reading The Dying Squad first.

You can order The Generation Killer at Amazon.co.uk, Amazon.com and Bookshop.org
Using these links earns us commission at no cost to you 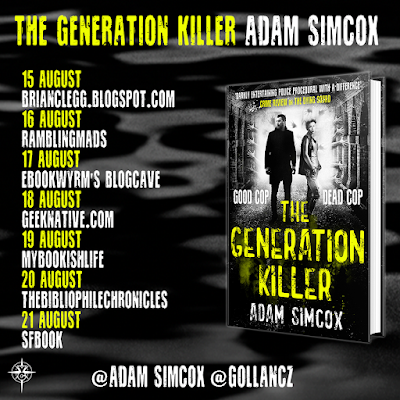