Why aren't you asking the obvious question? 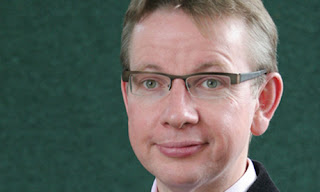 Every now and then, during an interview on the radio or TV, I'll find myself yelling at the interviewer, 'Why aren't you asking the obvious question?' It seems to me that there is such a killer point to make, yet they fail to do so.

I had such a frustrating moment this morning, during an interview with Michael Gove (pictured), the Conservative spokesman on children, schools and families. Now admittedly Michael Gove is one of those individuals who single handedly makes me not want to vote Conservative, even if I was in complete agreement with all their policies, but even so he was begging to be asked that killer question.

On the whole he was allowed to get away with this - but I was dying for him to be asked 'What about the banks?' When all those bankers claim that the only way they can get the best people is paying oodles of cash, surely we ought to be saying 'No, not at all. You need to increase the standing of the profession (and let's face it, the only way is up).' Let's limit all bankers' pay to the same level as teachers (oh and do the same for civil servants and MPs too, I hope), and put a lot of effort into talking up the job. Because, after all, paying more isn't the way to get the best people. Michael Gove said so.
education interviews politics radio teaching