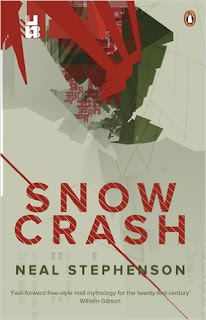 I've enjoyed several of Neal Stephenson's books, but find many of them far too long, suffering from bestselling author bloatitis, so I thought it would be interesting to get hold of a copy of his classic, Snow Crash - and I'm very glad I did.

Although not a pastiche, it depends heavily on four classics of science fiction. The obvious one is William Gibson's Neuromancer, because of the net-based cyberpunk aspects that are central to Snow Crash. (The snow crash of the title is nothing to do with skiing and everything to do with computers crashing.) However, the pace and glitteriness owes a huge amount to Alfred Bester's Tiger Tiger (that's the UK title - it was originally The Stars my Destination), while the corporate-run world has a distinct feel of Pohl and Kornbluth's Gladiator at Law,  though interestingly here it's a world without any laws whatsoever. And finally there's a touch of Samuel Delaney's Babel-17, where a language is capable of doing more than simply describe things. In Delaney's book, the language is so specific that if you name something, you can construct it given only that name - here, language is capable of re-programming the human brain.

These influences, though, are only for those who are interested. If you like the kind of science fiction that hits you between the eyes and flings you into a high-octane cyber-world, particularly if you have an IT background, this is a masterpiece. Once you get over the odd name of the hero/protagonist (he's called Hiro Protagonist. Really) it is a joy to read. And despite being over two decades old, the technology really doesn't grate. Okay, Stephenson set it too early for the level of virtual reality capability, and there are too many references to video tapes, but otherwise it could have been written yesterday. What's particularly remarkable is that it is all about the internet (if not named as such) at a time when the internet wasn't widely known. This was written in 1992, yet when Microsoft launched Windows 95, it wasn't considered necessary to give any thought to the internet. That's how quickly things have changed.

As you might expect from Stephenson, there are some dramatic set-piece fights and rather a lot of violence, virtual and actual, but it also features erudite and quite lengthy library exposition of the precursor myths to many modern religions and some mind-boggling (if far-fetched) ideas about language, the nature of the Babel event and of speaking in tongues. There's also a strong female character, though today's readers might raise an eyebrow about a relationship between a 15-year-old girl and a thirty-something mass murderer. Oh, and I love the rat things.

If you find some of Stephenson's more recent books overblown, this is the one to go back to. Nicely done indeed.
Snow Crash is available from amazon.co.uk and amazon.com.
Using these links earns us commission at no cost to you
book book review cyberpunk review reviews science fiction technology