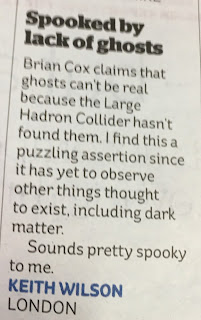 The nation's favourite TV physicist, Brian Cox, has caused a bit of a ruckus amongst those who like a good ghost. Cox has often, if incorrectly, been represented as saying, as in this letter in the i newspaper, that ghosts don't exist because the Large Hadron Collider 'hasn't found them.'

I ought to stress by the way that many headlines were misleading. The Metro, for example, led with 'The Large Hadron Collider has proved that ghosts don't exist, Brian Cox claims.' It is very difficult to prove something doesn't exist, especially ghosts. To begin with, we need to assume that ghosts are natural rather than supernatural. If the supernatural exists, physics can't help - so as a starting point we need to make this assumption. And even then, as the old saying goes, absence of proof is not proof of absence.

Thankfully, the LHC is not spending any taxpayer money on disproving the existence of ghosts. Instead, Cox was referring to a puzzle that the concept of ghosts presents. If they are natural, then they appear to be some form of insubstantial energy interacting with matter (i.e. us). This immediately rules out, for instance, the dark matter that Mr Wilson mentions in his letter, because dark matter (if it exists) only interacts with ordinary matter via gravity. We see ghosts, which means we need electromagnetic interaction. If ghosts depended on particles like those of dark matter than aren't detectable by the LHC, we also couldn't see them.

Now it's not that there aren't insubstantial energy particles that interact with matter. Photons of light fit that bill. But no existing particles (or, probably more accurately in the minds of physicists, no existing quantum fields) can somehow keep a structure together to make up an insubstantial ghost and at the same time interact with matter. So there has to be something else if ghosts are to exist. And what Cox is point out is that it's surprising that there is no evidence from the LHC supporting the existence of this new stuff. If it interacts with matter in a haunting, it should also be within the range of LHC experiments.

It's not beyond the wit of science to imagine a whole new kind of quantum field/particles that have restrictions that would prevent them appearing in LHC experiments but do allow them to do what ghosts do. Which is why we can't say that the LHC proves ghosts don't exist. However, to require such a major modification of our best model of what stuff is (the standard model of particle physics) would need strong, scientific evidence. And that simply doesn't exist.