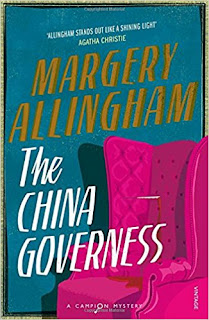 I am a huge fan of Marjory Allingham's Campion books - but even so, I have to say this is probably one to avoid, unless, like me, you want to have read the entire canon. One of Allingham's late contributions, written in the 1960s four decades after the first Campion books, it lacks the joie de vivre of the earlier titles. It's over-long, and very slow - in fact it verges on the dull in places.

That's not to say it's entirely without interest, but what interest there is remains specialist. It's a sociological museum, with its stiff, emotionally retarded upper-middle class characters, who we are supposed to sympathise with, but who mostly repel. By today's standards it is also horribly un-PC about 'mental defectives'. Some readers will, I suspect, be outraged - but you do have to see this as a fascinating uncovering of just how things were in the early 60s. We tend to look back and think of the sixties as being all hippies and free love and rebellion, but we have to remember this was less than 20 years after the end of the Second World War, and the whole point of what happened in the 60s was a reaction to this establishment stiffness.

Perhaps most fascinating is the reaction of older family members to a historical black sheep in their family. Where in the current TV show Who Do You Think You Are there is a kind of horrified delight at, say, finding a murderer in the family's past, here it causes genuine pain and anger. The family's way of dealing with unpleasant things is to pretend they don't exist. Sadly, though Campion does act as a kind of operational fairy godmother to make things happen (eventually), we see very little opportunity for his usual skills - and Lugg is sadly extremely underused.

So, definitely not a book to read as an introduction to Campion - only worth going for if you do want to see just how uptight and sad the upper-middle class was in the early 1960s.

The China Governess is available from amazon.co.uk and amazon.com
Using these links earns us commission at no cost to you
book review books crime crime novels fiction review reviews