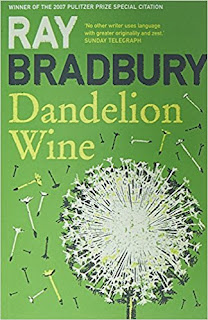 I originally read Ray Bradbury's Dandelion Wine when I was young, and found it really disappointing. I've just re-read it for the first time, and realised that I was entirely wrong in how I looked at it.

The trouble was that Bradbury's Something Wicked This Way Comes was (and is) one of my favourite books ever - and the edition of Dandelion Wine I own (the Corgi SF Collector's Library paperback with the crinkly purple cover) makes it sound like another Something Wicked. The tagline on the front says 'It was a fantastic summer of terror and wonder - a fantastic summer he would never forget...' I can imagine the young me thinking 'But this isn't right. It's not fantasy at all.' And it isn't.

At its most basic, Dandelion Wine is an affectionate portrait of a smallish US town in 1928, with a linking thread of a twelve-year-old boy. It's straightforward, sometimes a little mawkish, sometimes dramatic fiction. And it's Bradbury at his most poetic (something else the young reader probably didn't appreciate) - the lyricism is sometimes so strong it's almost as much a self-parody as John Sladek's breathtakingly sharp pastiche short story Joy Ride by 'Barry duBray.' (One of a set of evil take-offs including a story by 'Iclick As-I-move'.)

Reading it now, though, much older, I think there's something else to Dandelion Wine. It's almost a bookend piece to Something Wicked. Where that was a fantasy about being young and growing up, Dandelion Wine is often a book about growing old and dying, despite that young protagonist. Yes, it portrays beautifully being a pre-teen in a small town in the 20s, but age and death have a habit of dominating the scene. It's wonderfully structured as a set of vignettes - some as short as a single page, some making good length stories. And many of those stories are superb. I was particularly struck by the Helen Loomis segment. Not only did this make me come close to tears, it's strangely similar to the storyline of the movie Somewhere in Time, based on a Richard Matheson novel - with the ironic twist that the movie is a fantasy, usually Bradbury's speciality, where the Dandelion Wine version requires no magical time travel.

Bradbury's style won't work for everyone, but if you can cope with it, this is a wonderful book.

Dandelion Wine is available from amazon.co.uk and amazon.com
Using these links earns us commission at no cost to you