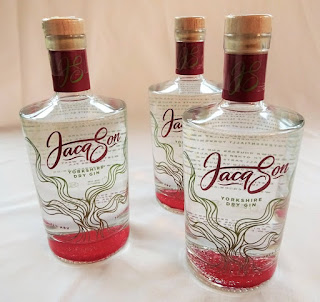 I know gin is very trendy at the moment, and I felt it was time to have a bit of a gin experience, sampling a new artisanal gin, JacqSon. This had all the potential for disaster.

First of all, this is Yorkshire gin - and I am firmly Lancastrian. However, strong though the rivalry is between the two counties, we do generally admit that, if it can't be Lancashire, Yorkshire's the next best thing, so this proved less of a problem than it may seem.

There was, however, a bigger hurdle to overcome. I don't particularly like gin. I love tonic water, but for me it tastes better without the gin in it. (My alcoholic tonic drink of choice is white port and tonic, which is wonderful. Has to be white port though, not ruby or tawny.) But there have been lots of things over the years that I didn't like, but with a bit of effort got to appreciate, from mushrooms to bitter, so I was determined to give it a go.

What have we got here? It's a small run gin, made in a Yorkshire village by a mother/son combo (Jacqueline and son - geddit?). And to make it special they've given a local flavour to the botanicals. These are the extras added before distilling that give gins their unique character - and as well as the inevitable juniper and other common botanicals, they've gone for the very Yorkshire rhubarb and liquorice.

Bearing in mind I'm not gin-savvy, I got rather excited on hearing about the rhubarb. While I struggle to appreciate gin itself, I love sloe gin, which take plenty of fruity taste from those purple berries. But because botanicals go in before distillation, most of their flavour is lost. Somewhat disappointingly for me, the gin doesn't taste of rhubarb (or liquorice).

However, I gave it a go and I have to say I was pleasantly surprised. Like all gin, it's pretty pungent on its own, but had a more complex and interesting mix of taste than most gins I've tried. With tonic, if I'm honest, the tonic dominates the flavour, but the gin came through with a subtlety to the aroma that I really appreciated - one of the main reasons I've been put off gin and tonic is that some gins are too pungent, but this really did complement the tonic.

Don't get me wrong - I'm not going switch away from white port and tonic - but it was a pleasant surprise that I enjoyed the experience. And perhaps more importantly, the two gin-lovers in the house gave it a thumbs up, particularly noting that complexity of flavour and subtlety of aroma that must come from that unusual mix of botanicals. I have no doubt we'll be adding more JacqSon to our drinks cabinet (and, let's face it, the bottles look beautiful too).

You can find out more about JacqSon (and buy some!) at the website.

I need to declare an interest - the makers of JacqSon gin are family friends, and this is the only reason I tried it in the first place, but I would have happily have said it was terrible if I thought so - and instead I had a pleasant surprise.