'Two cultures' is live and well on Pointless 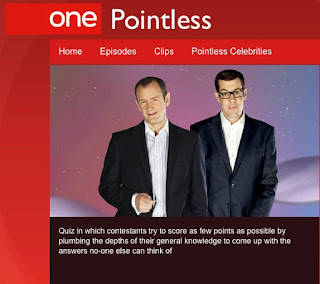 To get into this topic I have to admit to a guilty pleasure - when I want to have a totally undemanding half hour in front of the TV to unwind, I rather enjoy the quiz show, Pointless. But the last episode I watched made me think that C. P. Snow's 'Two cultures' is alive and well on the BBC.

In 1959, Snow explored the painful divide between the science and the arts - and the imbalance in that divide culturally. He pointed out that while we expect scientists to appreciate the arts - and the vast majority do - those from the 'arts' side of the divide (which includes most broadcasters and journalists) considered it almost a badge of honour that they knew nothing about the sciences.

In many ways (and, dare I say it, in part due to good popular science books and broadcasting) that divide is weaker than it once was - but Pointless presenter Alexander Armstrong (a man with an English degree) demonstrated painfully that there is still a strong support for this sad divide.

A contestant was pointing out that she wouldn't do very well in a chemistry round, because she had attended an art school since the age of four. My personal reaction was horror. What a limited education. Who can say whether a four-year-old will be more interested in the arts or the sciences? When I speak to at junior schools, the children are universally excited by science. Poor, deprived person, I thought. (And I would say the same of someone who knew nothing about the arts because she attended a 'science school' from age four.) But Armstrong was effusive at significant length about how wonderful this was. With his two cultures blinkers on, Armstrong saw this as a school that provided the important stuff and omitted the irrelevant.

We've heard a lot lately about lack of gender equality in the BBC - perhaps it's time we had a bit less arts/sciences inequality too.