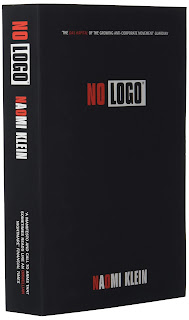 It's around 20 years since Naomi Klein's book No Logo was written (it was published in 2000). As it's generally regarded as an influential piece of writing, I thought it would be worthwhile revisiting it.

At the time, I thought it was an interesting book, if naive and painfully overwritten. Coming back to it, there were two immediate responses. One was to really be aware how much it would have benefitted from a serious edit - it's 490 pages of tiny print and probably only has the content of around five magazine articles. The rest is words for the sake of it and repetition. It's still worth reading, but it's unnecessarily hard work. The other is an element of plus ça change etc.

Inevitably part of the fascination of looking back is what has changed - although some of the big brands remain, others such as Virgin Megastores, Blockbuster, Benneton and Staples have disappeared or diminished, while the likes of Google weren't on the radar then. And neither Klein's anti-brand rebellion nor some of the nasty brand trends foreseen have come about.

I must admit, in part because it's such a US-oriented book, I didn't recognise some of the problems discussed, e.g. branding in schools, while branded stores becoming theme park-like destinations have never really happened over here.

It was interesting that one of Klein's bugbears was corporate censorship - for example, supermarkets deciding not to carry a particular magazine because they didn't like its ethos - when such censorship is now more likely to come from student unions.

It certainly isn't all bad. No Logo is a useful reminder of how relatively recent the move from vertical manufacturing, where companies made their own goods, to brand plus suppliers has been - and the potential problems this approach can bring (which haven't gone away). It's also good and still very relevant, given the 'gig economy', in the way that Klein points out that being freelance is good for some types of job, but is far from being a panacea.

Overall, though, bearing in mind our greater awareness now of social media bubbles, what came across strongly was how much of a bubble view of the world it was. So, taking on the two main UK stories covered, one was about the McLibel trial and the other about Reclaim the Streets. The McLibel trial had real impact on the relationship between corporates and activists and, while a farce, probably did a fair amount of good. But if you took Klein's picture of Reclaim the Streets (a few 'street parties' that stopped traffic as Extinction Rebellion has more recently), you would think it had transformed UK opinion, where the majority of the population away from a few fashionable bits of London and the odd trendy city were pretty much unaware of it at the time, let alone now. Nothing happened, except some irritating disruption.

Despite that bubble view, though, it's an important bit of US-centred social history and reminds us that we continue to need to keep an eye on those pesky corporations.

No Logo is available from Amazon.co.uk and Amazon.com which is by far the most ironic place to purchase it.