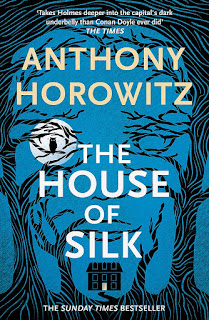 I was more than a little sceptical of the idea of someone other than Conan Doyle writing a Sherlock Holmes novel, especially one that would prove to be more than a pastiche, but Anthony Horowitz has managed to tread a remarkably fine line and produce an engaging Holmes novel that is very much true to the spirit of Conan Doyle, but has its own distinct nature.

While Horowitz makes use of all the dark settings of Victorian London, and language that we expect from the narrator, Dr Watson, he extends the characters of Holmes and Watson to add in significantly more humanity - these are less two-dimensional characters than those that Conan Doyle portrayed. (Don't get me wrong: I love the originals, but these versions have a little more to them.) Even the Baker Street Irregulars become people here, rather than devices to move the plot along.

Another advantage Horowitz has is being able to bring in a crime that it is unlikely Conan Doyle could ever have written about - which he does with striking effect.

The book wasn't perfect. We could have had a few more twists and turns - perhaps too many pages were given over to introspection - and I would have liked a bit more contribution from Holmes and particularly Mycroft, who seems bereft of his usual Olympian powers. But it remains a very enjoyable sidebar to the Holmes stories and I look forward to reading the second entry in the series.